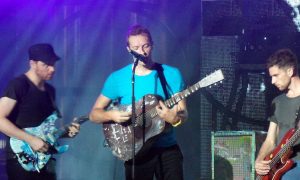 It will mark the first time the band has played in Israel and will be part of special “human rights” concert dedicated to peace.

The shows will also stand out for comprising an audience of both Israelis and Palestinians. Tickets to the show will also be sold through Palestinian ticket outlets.

For years, local producers have offered lucrative deals to entice the seven-time Grammy-winning band to rock out in Israel.

The band’s frontman Chris Martin arrived for the quick trip to the Holy Land in November, sparking rumors of a potential upcoming performance in Israel.

The April release of Coldplay’s video for it’s single “Up&Up” gained local notoriety as it was directed by the Israeli creative duo Vania Heymann and Gal Muggia.

Martin has spoken highly of the video, referring to it as “one of the best videos…ever made.”