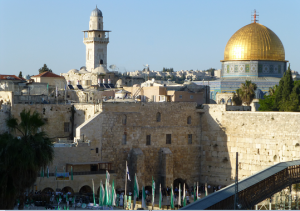 On-air controversy erupts on an Argentine TV game show when contestants are asked, “Tel Aviv is the capital of what country?”
• A contestant challenged the question, saying ‘Israel is probably what I should say, but that is not the correct answer.‘

The program, which airs on the local Canal 13 station, pits contestants against each other with trivia questions, with the goal of winning a car. On Friday’s show, in the final stage of the competition, the last remaining contestants were asked the question about Tel Aviv.

After one contestant said she didn’t know, the other said that while Israel is probably what he should say, that is not the correct answer because Jerusalem is the real capital.

Eventually, after a commercial break, a judge in the show said the question had to be struck down. “Tel Aviv is an important city in Israel and the foreign embassies are stationed there, but the government agencies are based in Jerusalem and that is therefore the legitimate capital city,” the judge said.

“U.S. President Donald Trump has recently said so, and several other countries are going to recognize Jerusalem as the capital as well, ” the judge added, effectively siding with the male contestant.

As a result of the final question being nullified, it was unclear who the winner was. After the host consulted with the production team, it was decided that the second contestant would get the car, as he provided the closest answer.

Most embassies in Israel are located in the greater Tel Aviv area because of the disputed status of Jerusalem. Trump’s decision to recognize Jerusalem as Israel’s capital and relocate the U.S embassy there was a departure from the traditional U.S. policy that did not officially recognize Israel’s sovereignty over the city. The decision was hailed by Israelis and soon prompted additional countries to follow suit.

In December, after Trump’s announcement officially recognizing Jerusalem as Israel’s capital, Argentina was among the 35 countries that abstained from a U.N. vote condemning Trump’s move.

The erroneous question outraged the leaders of the Jewish community in Argentina, who accused the production of having an ulterior political motive, or being ignorant.

After the show issued a live apology, the local Jewish groups said in a statement that “the Zionist organizations in Argentina want to thank the producers of the show for recognizing the fact that Jerusalem is the capital of Israel during the broadcast, and that Argentina abstained from the historic U.N. vote that determined unequivocally that Jerusalem has been the capital of Israel for more than 3,000 years.

“Anyone looking to erase the Jewish people’s history is, in practice, undermining any chance of peace in the region. The recognition of Jerusalem as the capital of Israel is an act of justice and progress toward a historical truth. It is an act of respect toward a sovereign state that is free to determine its own capital,” the statement said.

Viewers were also outraged over the gaffe. “It is a disgrace that a game show on a national network doesn’t know where the capital of Israel is,” one viewer wrote.

Others wrote “Jerusalem is the capital of Israel regardless of whether the regime in Argentina officially recognizes it,” and that “the question demonstrated ignorance and pure anti-Semitism.”