Coping with stomach cancer, Abbas’ replacement is named by Fatah 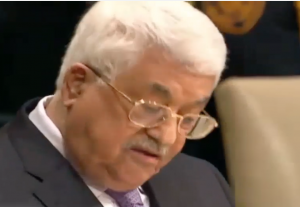 Should the Palestinian autocrat be incapacitated, Fatah officials appointed Mahmoud al-Aloul as “acting president of Palestine” for 90 days, until elections can be held.
• Fatah officials claim appointment of interim leader was prompted by ‘rumors’ of Abbas’ failing health.

Palestinian Authority President Mahmoud Abbas will be replaced by his deputy, Mahmoud al-Aloul, if he becomes unable to fulfill his duties, Fatah’s Central Committee decided in Ramallah on Saturday.

According to Palestinian media outlets, Fatah’s Central Committee decided that should Abbas, 82, were unable to continue in his role, al-Aloul will be appointed “acting president of Palestine for a period of three months until elections can be held.”

According to senior Fatah officials, the committee, also amended Palestinian law to facilitate the transfer of Abbas’ presidential powers to his deputy if it becomes imperative, for the aforementioned three-month interim period.

“The amendment to Palestinian law on the matter of transferring Abbas’ presidential authorities to his deputy Mahmoud al-Aloul, was made in light of rumors regarding Abba’s failing health,” one council official said.

The Palestinian president was hospitalized in the U.S. during his recent visit to New York, sparking a flurry of media reports quoting unnamed medical officials saying Abbas was coping with stomach cancer. This, in turn, raised concerns in the PA that he would be rendered incapable of performing his duties because of declining health.

Abbas appeared to be in poor health while addressing the United Nations Security Council at U.N. headquarters in New York last week, after which he was reportedly taken to a hospital in Pittsburgh. Close aides to the PA president, however, claimed the purpose of the hospital visit was a routine checkup and that Abbas’ doctors released him with a satisfactory bill of health.