Egypt’s Coptic Christians complained of discrimination under Mubarak but fear it may get worse if an Islamist takes power.

CAIRO – Egypt’s Coptic Christians complained of discrimination under former Egyptian President Hosni Mubarak but fear it may get worse if an Islamist takes his place in next week’s presidential election.

Long-suppressed Islamists already dominate parliament. Islamist contenders for the presidency say Christians, who form about a tenth of Egypt’s 82 million mostly Muslim people, will not be sidelined, but mistrustful Copts will not vote for them.

The single biggest Coptic grievance and the source of most sectarian violence in Egypt is legislation that makes it easy to build a mosque but hard to construct or even repair a church. 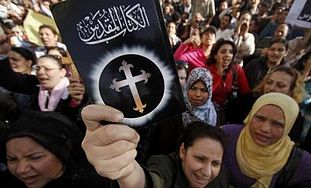 A new mosque needs only a permit from the local district. A church needs extra paper work and the president himself must sign off, a task Mubarak eventually delegated to city governors.

He worries that an Islamist head of state would make life more uncomfortable for Copts, who blame ultra-orthodox Salafi Muslims for a surge of attacks on churches since Mubarak’s overthrow in a popular uprising 15 months ago.

“Islamist policies on Christians are vague. It is possible they would restrict our freedoms to gain popularity among strict Muslims at our expense,” said Malak, 33, whose Cairo church has been the center of a row over whether it has a proper license.

A senior Orthodox Coptic church official said 6 million Copts are among the 50 million eligible voters who go to the polls on May 23 and 24 and again next month in a run-off if no candidate scores more than 50 percent in the first round.

If Christians voted as a bloc – which may not happen – they could help swing an unpredictable race whose main contenders are either Islamists or men who served under Mubarak at some time.

Many voters are undecided, but ask a Copt and most are swift to declare a preference for Shafiq or Amr Moussa, the former Arab League chief and Mubarak’s one-time foreign minister.

Both are Muslims, like all 13 candidates, and both were part of the Mubarak era, when Christians complained of being treated as second-class citizens in the workplace or elsewhere.

But Copts see them as safer bets than Islamists such as the Muslim Brotherhood’s Mohamed Mursi or former Brotherhood member Abdel Moneim Abol Fotouh, despite the latter’s attempts to woo liberals as well as the Salafis whose leaders have endorsed him.

No election rally is complete without an appeal to “all Egyptians, Muslims and Christians”, but the place of Christians and the reach of Islamic law are burning issues in a country struggling to work out its new identity and aspirations.

During a televised campaign debate, Moussa asked Abol Fotouh whether Muslims had a right to convert to Christianity. Abol Fotouh said a Muslim who did so would face efforts to make him return to his old faith all his life – a stance comparable to a Catholic priest trying to save a lost member of his flock.

The main Islamic schools of thought consider converting a forbidden act, but differ over how to deal with it, with some strict Muslims saying such apostasy is punishable by death.

Christianity takes a looser attitude, but in Egypt Copts who leave the faith may be ostracized by their community.

Moussa, a self-declared liberal nationalist, in turn faced questions about what role he would give Islamic sharia.

“All of the Islamist presidential candidates including Abol Fotouh are unclear on issues related to minorities and Christians,” said Peter el-Naggar, a lawyer who has often represented the church and Muslim converts to Christianity who want the state to recognize their change of faith.

“We still don’t know and don’t trust what they would do to us if they came to power,” he said, citing conversion and church-building as the most sensitive sectarian issues.

A year ago Islamists accused priests in the church in Cairo’s poor Imbaba area of holding captive a Christian woman who had converted to Islam. Deadly clashes ensued and the church was burned down. The ruling military council had it renovated.

A church official, who took part in talks to resolve the Imbaba dispute and who asked not to be named, said the outcome might have increased Coptic support for an “army” candidate.

“I can see many ordinary Christians are supporting Shafiq as they see in his military background strength to protect their rights against Islamists,” he said. “They saw their church burned and destroyed and they don’t want that again.”

Conflicts over conversions, cross-faith romances or church-building have long flared in towns or villages where turf wars or family rivalries often loom as large as sectarian loyalties.

But the attack on the Imbaba church was one of several that have stoked Coptic fear and anger since Mubarak’s overthrow.

After one such reported church attack in southern Egypt, Copts protested in Cairo outside the state radio and television complex of Maspero. About 25 people were killed in clashes between Christians, unidentified thugs and military police.

The sectarian element in a still-murky episode was a sickening jolt for many Egyptians after the harmonious images of the anti-Mubarak revolt in Tahrir Square, when Copts formed protective cordons around Muslims at prayer and Muslims brandished the Koran and the Bible, chanting “in one hand.”

Copts suffered another blow to their confidence when Pope Shenouda died in March, aged 88. Many viewed him as a political as well as a religious patriarch and his death left them feeling bereft of a voice as Islamists rose to power.

Hafez Abu Saeda, the head of the Egyptian Organization for Human Rights, says four-fifths of sectarian violence in the past five years was related to church construction issues and that even-handed legislation was vital to defuse tension.

For many Copts, it may be too late. Plenty have emigrated and others say they will leave Egypt, home to the Middle East’s largest Christian community and one of its most ancient.

Christian activist Naguib Gobrail told Al-Masry Al-Youm daily in April that about 100,000 Christians had departed last year and many more would go if an Islamist became president.

“I want to feel relaxed in my country,” said Ayman, a 36-year-old Coptic taxi driver, giving only his first name.

He had earlier tried to cover the traditional cross tatooed on his hand when he saw a veiled Muslim woman request a ride, but made his feelings clear when asked about the election.

“I want a fair, liberal person to balance the spread of Islamists. Only God knows what they would do to us and to moderate Muslims if they won.”