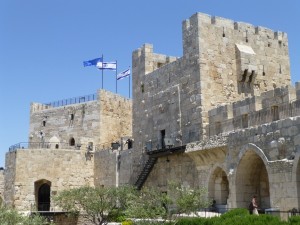 The Czech Republic reconsiders, deciding not to be influenced by inciters by carry out its previous decision to replace Jerusalem with Tel Aviv as the capital of Israel in school textbook maps.

Mayor of Jerusalem Nir Barkat celebrated the decision of the Czech government not to cave to Palestinian pressure and show Tel Aviv – not Jerusalem – as the capital of Israel in school textbooks, after it had declared it would do so a week ago.

“We’re on the map!” Barkat said. “The truth has won out over the falsehood: […] I am happy that the letter I sent to the Czech Prime Minister and the other diplomatic efforts had influence, and I thank the Czech government for deciding the correct decision and not giving in to wild Palestinian lies and incitement.”

The declaration comes after the Palestinian Ambassador to the Czech Republic, Khaled el-Atrash, filed a complaint against the Czech ministry of education because it was teaching children that Jerusalem is the capital of Israel.

“This map [showing Jerusalem as the capital of Israel] not only presents something which is unacceptable to Palestinians, but also shows something which goes against international law and is against the official position of the European Union – which includes the Czech Republic,” Atrash said.

As a result, the Czech education ministry had promised that “The information in the [school textbook] atlas will be corrected by the coming school year.” The Czech foreign ministry, for its part, had proclaimed: “Countries within the European Union including the Czech Republic, view Jerusalem as the future capital of two countries – Israel and the future Palestinian state.”

In response, Israeli foreign ministry representative Emanuel Nachshon had said that Israel would work to combat the decree and it succeeded in its efforts: “The [Israeli] foreign ministry is working with the relevant authorities in the Czech government to cancel this devious order. There is no limit to Palestinian incitement. They are not content with poisoning only the minds of young Palestinians, but also request to sow lies into the minds of the youth of the Czech Republic.”