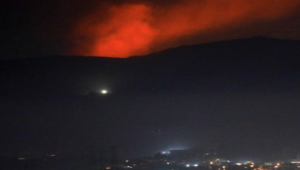 Seven people, four Iranians and three Syrians, were killed in an airstrike reportedly launched by IAF in the Damascus area on Thursday night, according to the Syrian Observatory for Human Rights, as quoted by Ynet. The attack was allegedly targeting Iranian ammunition depots in the city.

Israel has continued to strike targets in Syria, as well as Iraq, as part of a campaign to weaken Iran and to remove its forces from the region. Netanyahu told Army Radio on Wednesday that Israel would not allow Iran to gain a foothold along the northern border, pointing out that Israel has conducted “countless” attacks to prevent this.

Tzvi Joffre contributed to this report.