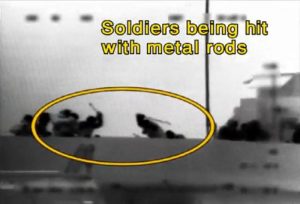 Major (res.) N. was the sixth soldier to board the Mavi Marmara. According to him, even a decade later the issue is still sensitive for some of his friends: “This was not the first flotilla we needed to stop, nor the last one. The unusual thing about this flotilla was a very large number of sailors. Prior to the operation, we knew that there were many participants, but we did not know that besides the operatives who boarded the ships in Antalya, some 60 IHH terrorist operatives in Istanbul also boarded it . In the flotilla that preceded the Marmara, we met peace activists, but not terrorists who received money to kill IDF soldiers.”

N., who also served as a paramedic, recalls: “It was perhaps even a bit more for the Marmara. In the mission briefing, we talked about an extreme scenario. If we hadn’t talked about it, we probably would have come down to the deck with Hawaiian shirts. We came armed, with vests and firearms, even though the media reported that we went down with paintball guns.”

Major N did not want to talk about it, but related that one of his friends was “abducted” by IHH activists , and it took the soldiers a long time to understand and find him: “I only know I found him after 40 minutes and treated him medically. From the moment the fight was over, five minutes after we had slid down, and until 6 AM, for about an hour and a half, I was treating the wounded.”

The Mavi Marmara was one of six ships which attempted to reach the Hamas-controlled Gaza Strip in violation of Israeli maritime restrictions meant to prevent the smuggling of weapons to terrorists. While Israeli naval forces boarded the other five vessels without incident, they faced violent resistance on the Mavi Marmara.

Nine Turkish activists were killed after dozens of assailants attacked IDF forces as they boarded the vessel. Ten soldiers were wounded in the scuffle.