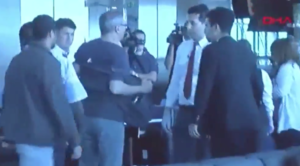 The Turkish media teams were invited to the airport to cover Na’eh’s departure from the country and filmed him removing his jacket at the request of security personnel.

Na’eh was also asked to remove his shoes, following which a Turkish security guard patted him down.

Because of the on-camera humiliation, the Turkish supervisor in Tel Aviv Umut Deniz was summoned by the Israeli Foreign Ministry for a reprimand at 1pm. Deniz is considered the number 2 diplomat at the Turkish mission in Israel.

“This was an intentional humiliation,” an Israeli official said. “The journalists were invited to the airport and taken into the sterile area of a Turkish Airlines flight, where security checks are done right before boarding.”

It was the latest blow in the recent diplomatic crisis between Israel and Turkey, which started with Erdoğan’s decision to recall the ambassadors to the US and to Israel in the wake of the opening of the American Embassy in Jerusalem and Israel’s handling of the Gaza border riots, which exacted a high death toll.

Erdoğan then decided to expel Na’eh, with Israeli responding to the move by asking the Turkish Consul in Jerusalem, Hüsnü Gürcan Türkoğlu, to leave the country.

This led the Turkish Foreign Ministry to summon Israel’s Consul-General in Istanbul, Yosef Levi Sfari, and ask him to leave the country until further notice.

None of the diplomats have been declared persona non grata, and the expulsions are temporary.

Turkish President Recep Tayyip Erdoğan has been very vocal in his criticism of Israeli handling of the rioting on the Gaza border, during which mostly young Palestinians encouraged by Hamas have been trying to breach the border fence and enter Israel in what has been dubbed the “Great March of Return.”

Over 100 Palestinians were killed in border clashes since the “Great March of Return” campaign began in March, with 60 killed on Monday alone.

Erdoğan and Netanyahu have been exchanging barbs over the past two days in the wake of the Turkish president’s harsh criticism of Israel.

On Tuesday, Turkish opposition parties joined in the condemnation of Israel for the events on the Gaza border; they even called for the annulment of the reconciliation agreement signed between the two countries.

Ayalon, who invited the media to cover the reprimand to the ambassador over comments Erdoğan made at the time against Israel, refused to shake the Turkish diplomat’s hand. He also sat on a chair, looking down at Celikkol, who was sitting on a couch.

In ‘response’, a picture was posted on the Instagram account of Israeli Prime Minister Benjamin Netanyahu’s son Yair Netanyahu today (May 16 2018) with an explicit message for Turkey. 🇹🇷