A look at the Oslo Accords that changed the West Bank, and Israel, 20 years later.

By TOVAH LAZAROFF
In the last 20 years, the Oslo Accords have turned from a dream into a nightmare for their main architect, Israeli left-wing politician Yossi Beilin. 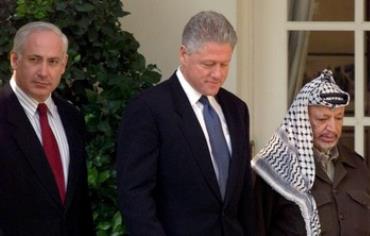 “Enough is enough, it has to die,” Beilin told The Jerusalem Post on the eve of the anniversary of the famous Sept. 13, 1993 handshake on the White House lawn between then-prime minister Yitzhak Rabin, Palestine Liberation Organization chairman Yasser Arafat and US president Bill Clinton.

Beilin, who at the time was deputy foreign minister in the Labor-led government, stood on the lawn with hundreds of other dignitaries, filled with both hope and fear.

On the positive side, after over a year of work on the process, Beilin said, “It was like a bar mitzva for me. Everyone hugged me and congratulated me.” He imagined then that the five-year negotiating track Oslo set out would indeed culminate in a two-state solution that would end the conflict.

But he feared that the ceremony that marked mutual recognition between Israel and the PLO, and the first direct legal negotiations between the sides was premature, because it gave the false impression that peace had already arrived.

“I thought people watching TV would say, ‘Okay, at least one problem has been solved,’” Beilin said.

Indeed, the Oslo Accords are often spoken of as a peace process that lasted seven years, but fell apart in Camp David in 2000 without the conclusion of a final-status agreement for a two-state solution.

But in reality, the Oslo Accords had served as an interim agreement between Israel and the PLO that provided a framework by which both sides could operate together in the West Bank and Gaza, in lieu of Palestinian statehood.

It created the most substantive changes to the West Bank and Gaza since Israel won control of the territory during the 1967 Six Day War.

For the first 26 years after the war, Israel had sole military and civilian control of the area and handled all aspects of Palestinian life.

With the onset of Oslo, the PLO leadership under Arafat, which had been exiled in Tunisia, was allowed to return to the area. Through Oslo, under a newly created government called the Palestinian Authority, Palestinians were granted civilian autonomy of 40 percent of the West Bank. This included all the Palestinian cities and many of their outlying villages, now known as Areas A and B.

The Palestinians were also granted the right to a police force in order to maintain internal law and order. A host of joint committees were set up for Israelis and Palestinians to cooperate on issues of mutual interest, such as security, economics, water, electricity, the environment, transportation, labor and trade.

When the negotiation portion of Oslo broke down in 2000, its operational changes continued for the next 13 years through other peace initiatives such as the Road Map and Annapolis, and they remain legally binding, according to Israel’s former ambassador to Canada Alan Baker, who served as Israel’s legal adviser on the Oslo Accords.

Initially, the changes were positive for the Palestinians, because they empowered the PLO and gave them the blueprint to move toward statehood. But as time passed and no agreement was in sight, the Palestinians felt restricted by an accord that bound their statehood aspirations to negotiations, while at the same time allowing Israel to solidify its hold on Area C of the West Bank. All Jewish settlements are located in Area C, which covers 60% of West Bank territory and is home to a minority of Palestinians. It also has the largest stretches of undeveloped land in the West Bank.

Dore Gold, the former Israeli ambassador to the UN from 1997 to 1999, this week recalled the skepticism he felt as he watched the White House ceremony on television from his Jerusalem home.

“I felt this could either produce a breakthrough in peace or a total disaster. I was tending to think it could lead to a disaster,” Gold said, as he sat in his office in the Jerusalem Center for Public Affairs.

Gold was struck by concerns raised by people close to the process, including some close to Rabin. Gold said he felt it was put together too quickly, and placed politics over security.

Security concerns, both in light of territorial issues and terror concerns, was one of the central problematic issues, said Gold.

“The process was riddled with problems. Rather than start with Israel’s security requirements, which I was aware of, and then construct a political settlement that would protect Israel’s security, it worked in the exact opposite way – of first coming to a political agreement and then asking the army to break its head finding a solution,” Gold said.

On top of that, he explained, “You were taking an organization which was on your terrorist list, living in Tunisia, and which was on the losing side of history and you were planting it in Gaza and the West Bank.” It raised obvious questions, he said.

“Are you certain it has made a transformation? Are you really dealing with the Nelson Mandela of the Palestinians or with a movement that retained a fundamental reservation about Israel’s existence?” asked Gold.

Unfortunately, Gold said, Arafat did not disavow violence in favor of statehood.

As policy adviser to Netanyahu when he first became prime minister in 1996, Gold said, he was privy to intelligence reports that showed that in 1997 Arafat gave the green light to terrorist attacks against Israel.

That was followed, he said, by the more than 1,000 Israeli deaths in Palestinian terror attacks during the second intifada, which began in October 2000 – after the Oslo talks feel apart.

“We have to reach peace with our Palestinian neighbors, but the diplomatic approach that you take is the $64,000 question. You want a peace process that is workable, not one that is doomed to fail,” Gold said.

But over time, he said, he has come to understand its value, as an interim agreement; so much so, that until a permanent solution is found, he believes the Oslo Accords should be retained.

“It became a document that allowed Israelis and Palestinians to manage their differences. I think it would be a mistake for Israel to renounce it,” Gold said.

Baker explained that it locks both sides into a peace process.

On the shelf in his study at the Jerusalem Center for Public Affairs, he has a frayed copy of Oslo I, signed in 1993, and a follow-up document, Oslo II, signed in 1995.

He opened it as a reference while he talked, and flipped through its pages, filled with notes and coffee stains, as he looked for a relevant paragraph to make his point.

“The assumption was that the final-status agreement would ultimately be the agreement that would lead to the establishment of the Palestinian state, and no other way,” Baker said.

“It says specifically here, the final clauses say, ‘Neither side shall initiate or take any step that would change the status of the West Bank and the Gaza Strip pending the outcome of permanent status negations,’” Baker said.

This means, “the Palestinians won’t declare a state outside of the negotiating process and the Israelis won’t annex [Area C].

This is what was behind this language and given that I was involved in drafting it, I should know it.” Oslo II also grants legal standing to both the presence of the PA and Israel in the West Bank, Baker said.

“From the minute we [Israel] signed Oslo II in 1995, Israel’s presence in the West Bank in Area C was with the agreement of the Palestinians,” Baker said.

Palestinian agreement in that document to Israel’s presence in Area C until a permanent agreement is reached, means that Israel can not be considered an occupying power, Baker said.

Gold said Israel never benefited diplomatically from this revolutionary shift – in which Israel could no longer be considered an occupier in the West Bank.

“Smart diplomacy in the mid- 1990s would have taken that change and run with it,” Gold said.

“Israeli diplomacy never took advantage of the revolutionary change and we allowed ourselves to be condemned as occupiers in one international forum after another,” he said.

He recalled that after the Accords were signed, the International Committee of the Red Cross, a body entrusted with overseeing the implementation of the Fourth Geneva Convention, held a seminar in Gaza to ponder if it still had a role to play in light of the new changes.

Oslo is the document used by Israel to object to Palestinian unilateral statehood efforts at the UN and the International Criminal Court, Gold said.

But Beilin maintained that Oslo’s positive impact has been replaced by negative results, as a process designed to last five years has hit is 20th anniversary.

In his worst nightmare, he said, he never imagined this scenario.

As an interim agreement, Beilin said, the Oslo Accords function as a document that allows the status quo to continue.

He charged that it provides only a fig leaf of autonomy for the Palestinians.

“It is being used or abused by those who opposed it at the beginning, so that it became a kind of an umbrella for the continuation of the settlements,” Beilin said.

“It became the asylum for those who do not want to solve the problem. It does not serve those who want an independent state, and those who want to save Israel as a democratic and Jewish state,” Beilin said.

He is among those who hope that the results of the latest round of peace negotiations that began in late July under US Secretary of State John Kerry will lead to a document that would replace Oslo.

He does not believe, he said, that it is possible to come to a final-status agreement within Kerry’s nine-month timetable.

But, he said, it would be possible to come an interim agreement that is part of a gradual process toward a permanent one.

Such an agreement, he noted, would immediately grant the Palestinians sovereign statehood with temporary borders that already include portions of Area C, thereby increasing the PA’s territorial hold.

Such a move, he said, would improve Israel’s international standing.

It could also allow the PA to begin to absorb some of the Palestinian refugees who have fled Syria.

But former PA minister of prisoner affairs Ashraf al-Ajrami said he has learned from Oslo to be skeptical of interim agreements. He watched the handshake on the White House lawn on a television set in an Israeli jail, where he served time from 1984 to 1996 for his activities against Israel.

“We followed everything about the agreement. We were very hopeful that prisoners would be released and we would have a Palestinian state,” said Ajrami.

But, he said, now Palestinians fear that a second interim agreement will become a permanent one.

Israel will use it to make facts on the ground and to make it impossible to have an independent state, Ajrami said. The only possible interim agreement the Palestinians would consider would be one with a set timetable for implementation of a permanent agreement.

“Israelis used the Oslo period to make facts on the ground, especially by building intensively in the settlements and everywhere in the West Bank. So now, the Palestinians think that the Oslo Accords did not bring them what they wanted – a state.”

“Many of them now consider that the Accords have ended,” Ajrami said.