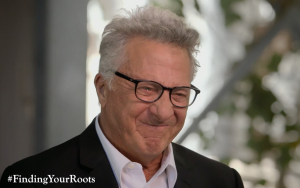 Dustin Hoffman tears saying, ‘I am a Jew…They all survived for me to be here,’ speaking about his family’s secret: the painful struggle, escaping the gulag of the Soviet Union.

But in a recent episode of PBS’s Finding Your Roots, the 78-year-old star finally uncovered the truth.

Hoffman broke down in tears as show host Henry Louis Gates Jr. showed him medical records belonging to his great-grandmother Libba, who against all odds managed to enter the US despite having lost an arm and part of her eyesight during a harsh, five-year stint in a Russian communist concentration camp, or gulag.

According to the Ellis Island medical records, Libba was also described as “senile” upon arrival – but that evidently didn’t stop her rebuilding her life in Chicago, where she died aged 76 in 1944.

Her husband and son were both killed by the Cheka, the Soviet Union’s secret police. After surviving five years of cruelty in the camp, Libba escaped and fled to Argentina, before moving to America.

In a clip from the season finale of the series, which uncovers celebrities’ family history, Gates Jr. tells Hoffman: “This is the hero of your family tree,” as he makes the revelations – kept secret from Hoffman since childhood.

“She was a hero,” Hoffman responded, before breaking down in tears.

“People ask me today: ‘What are you?’ I say, ‘I’m a Jew,’ ” the Hollywood star continued, fighting through the tears. “They all survived for me to be here.”