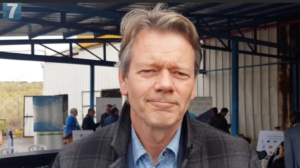 Visiting Israel, Dutch MP Joel Voordewind, who was the first to oppose the EU’s labelling law on requiring labels on only Jewish products from Judea and Samaria, also put forward a resolution to freeze financial aid because of the Palestinian Authority’s “pay-to-slay” policy.

Arutz Sheva spoke to MP Joel Voordewind from the Netherlands, who was the first to oppose the EU’s recent law requiring the labelling of products from Israeli communities in Judea, Samaria and the Golden Heights.

Voordewind is in Israel for the annual Israel Allies Foundation Chairman’s Conference taking place at the Waldorf Astoria hotel in Jerusalem.

The conference brought to Israel a delegation of 25 ministers and parliamentarians from around the world who made a special visit to Samaria as part of the conference.

Voordewind, who met the parents of Kim Levengrond-Yehzekel and Ziv Hajbi who were murdered in the terrorist attack at the Barkan industrial zone, related to that meeting and said, “It’s a pretty sad sight. We heard the story of two parents who lost their boy and girl while they were trying to work together with Palestinians and they sacrificed their lives for peace. They wanted to cooperate with the Palestinians and in the end, it became their death.”

“We as the Dutch parliament and my party stand for more coexistence, more reconciliation projects,” he explained.

“We just put forward a resolution on labelling. It’s difficult because the European Court of Justice ruled that all products from disputed areas should be labelled, and we put forward a resolution that this can only be implemented if all other disputed areas in the world are also labelled, and that resolution was accepted by our parliament,” said Voordewind in relation to the actions his party has taken against the labelling requirement.

“If it’s only focused on Israel, it’s against international law, against the principle of non-discrimination. So that’s why we put a resolution forward and that’s why it got a large majority in our parliament,” he added.

Voordewind said his party has also put forward a resolution against the Palestinian Authority’s “pay-to-slay” policy whereby terrorists who murdered Israelis and their families are paid monthly allowances.

“We’ve put forward a resolution to stop paying the Palestinian Authority as long as they pay bonuses to convicted terrorists. We try to share our experience with other colleagues in the world and try to stand for Israel more strongly.”