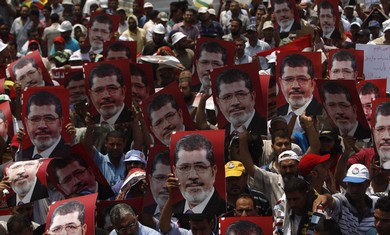 Morsi supporters hold up his posters in Cairo, July 3- REUTERS

Sisi called for presidential and parliamentary elections, a panel to review the constitution and a national reconciliation committee that would include youth movements. He said the roadmap had been agreed by a range of political groups.

Fireworks burst over Cairo’s Tahrir Square, the center of protests against Morsi, and across the Egyptian capital after the army suspended the constitution and appointed a new, interim head of state on Wednesday.

“The people and the army are one hand,” protesters cheered in the square, amid the roar of horns and chanting, a Reuters witness said. 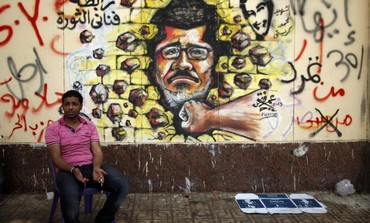 Egypt’s state-run Al-Ahram newspaper reported on its website that the army told Morsi at 7 p.m. (1700 GMT) that he was no longer head of state. It quoted a presidential source.

Egypt’s leading Muslim and Christian clerics backed the army’s announcement by Sisi that deposed the elected president, Mohamed Morsi of the Muslim Brotherhood.

Ahmed al-Tayeb, Grand Sheikh of Al-Azhar, Cairo’s ancient seat of Muslim learning, and Pope Tawadros, the head of the Coptic Church, both made brief statements following the head of the armed forces’s address.

Tawadros said the plan offered a political vision and would ensure security for all Egyptians, about 10 percent of whom are Christian.