CAIRO – Deposed Egyptian president Hosni Mubarak was sentenced to life in prison on Saturday for ordering the killing of protesters during the uprising that swept him from power last year.

Mubarak was wheeled into court on a hospital gurney to hear the verdict in his trial on charges of graft and complicity in the killings of protesters during the uprising that ended his 30-year rule.

An image grab taken from Egyptian state TV shows ousted Egyptian president Hosni Mubarak being wheeled on a stretcher into a court in Cairo on June 2, – Photo by AFP

State media reported that other defendants including his two sons, who are on trial with Mubarak, arrived at the court earlier.State television showed Mubarak arriving at the court on the outskirts of Cairo in a helicopter from the military-run hospital where he has been held in custody.

He was transferred to a white ambulance on a stretcher, wearing sunglasses. He had his arms behind his head. A sheet covered the lower half of his body.

Piles of bound court papers were stacked next to the judges’ bench, the television footage showed.

“Day of the verdict for the pharaoh,” wrote the Al-Watan newspaper in a front-page headline, a reference to Mubarak who was often called a modern version of Egypt‘s ancient rulers.

Hundreds of police with riot shields and batons surrounded the police academy where the 10-month trial has been held. 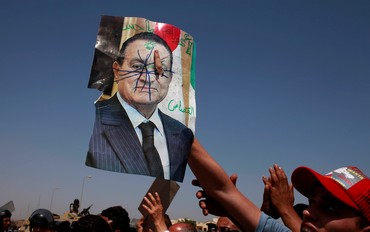 Few Egyptians expect Mubarak will go to the gallows, even if some think that is what he deserves. Protesters have often hung his effigy from lamp posts since he fell on Feb. 11, 2011.

“I want nothing less than the death penalty for Mubarak. Anything less and we will not be silent and the revolution will break out again,” said Hanafi el-Sayed, whose 27-year-old son was killed in the first days of the uprising that erupted on Jan. 25, 2011. He had travelled from Alexandria for the trial.

Mubarak, who also faces corruption charges, is on trial with his two sons Alaa and Gamal, his former interior minister and six other senior officers. His co-defendants have been held in a Cairo jail.

It is the first time an Arab leader ousted by his people has been placed before a regular court. Mubarak’s trial had Arabs glued to the television last year and sent a message to other autocrats battling rebellions what fate might await them.

“Mubarak’s trial has the potential to set a meaningful regional precedent for accountability for human rights abuses and for upholding international fair trial standards,” Human Rights Watch wrote in a report before the session.

But the ruling could not come at a more sensitive time for Egypt, right in the middle of a fraught presidential election that pits a figure from the Muslim Brotherhood, banned under Mubarak, against the deposed leader’s last prime minister.

The verdict could herald more political turmoil, although Judge Ahmed Refaat, who has already had three months to consider his decision, could postpone it if he needs more time.

“It cannot be that, after 15 months of the revolution and the crimes committed, Mubarak is not punished. This would destroy any trust in the judiciary,” said engineer Saad Ali, 35.

An acquittal or a light sentence could send protesters back on the streets. Many are already angry that the hated police force, blamed for about 850 deaths in the uprising, and other pillars of Mubarak’s rule have survived his downfall intact.

A conviction would prompt demands for Mubarak to be transferred to prison, instead of his luxurious hospital.

Egyptians saw Mubarak as they had never seen him before when his trial opened on Aug. 3, about six months after he was ousted. The man once at the centre of ceremonial state events was wheeled into the court on a gurney as on each of his court appearances since.

He has rarely spoken except to declare his presence and deny the charges, including accusations that he was behind brutal police tactics used to quell mass protests against his rule.

Outside the court, Mubarak’s supporters and his opponents have often clashed, hurling stones and abuse at each other.

Those divisions are now playing out in the presidential race. In a June 16 and 17 run-off, Ahmed Shafiq, an ex-air force chief like Mubarak, will face the Brotherhood’s Mohamed Mursi.

Shafiq has called his former boss a role model. His Islamist rival says that if he becomes president he will ensure enough evidence is produced to keep Mubarak behind bars for life.