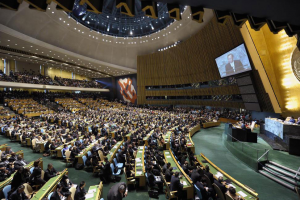 Having already been shut down at the UN Security Council, Arab states now call for an emergency General Assembly meeting on Gaza, in the aftermath of 4 more Palestinians that were killed by IDF fire on the Gaza border, Friday.

The UN General Assembly will hold an emergency meeting next Wednesday at 3:00 pm (19:00 GMT) to vote on an Arab-backed resolution on Gaza, the body’s president Miroslav Lajcak announced Friday.

The resolution will condemn Israel, and will be similar to one vetoed by the United States in the Security Council last week, which called for protecting Palestinians from Israeli aggression, according to diplomats.

It comes as four Palestinians were killed by Israeli fire on the Gaza border on Friday, as weeks of deadly clashes with protesters continued.

Resolutions adopted by the General Assembly have no binding value, unlike those passed by the Security Council.

“We will work next week to get the maximum number of votes,” a diplomat from a country that supported the measure told AFP.

Arab countries turned to the General Assembly in December after the US vetoed a Security Council vote on a resolution to condemn its decision to move its embassy in Israel from Tel Aviv to Jerusalem.

Fourteen members of the Security Council backed the December resolution, though the US as well as the council’s four other permanent members retain a right to veto.

The measure then received 128 votes out of 193 in the General Assembly.

A diplomatic source said the emergency meeting had been pushed by the Organization of Islamic States and the Arab League.

Several European countries have tried to dissuade Palestinians and Arab countries from demanding a vote in the General Assembly after last week’s US veto.

“Everyone told them not to do it,” said a diplomat on condition of anonymity, arguing the resolution could be counterproductive if it doesn’t receive at least as many votes as the one obtained in December on Jerusalem.

“It is unfortunate that instead of condemning the terrorists of Hamas, some countries are looking to satisfy their domestic political needs by bashing Israel at the United Nations,” Danon said in a statement.

It is not entirely clear what form of protection the Palestinians of Gaza are seeking, from observers to a full blown peacekeeping force.

Arab states have recently turned to UN Secretary-General Antonio Guterres to make proposals on this matter.

But according to a diplomat who asked for anonymity, he said he needed a mandate from the Security Council to look further into the issue.

On Friday, four Palestinians were killed in the Gaza Strip by Israeli soldiers near the border fence during new clash-ridden protests in the blockaded enclave.

At least 129 Palestinians have been killed by Israeli fire since protests broke out along the Gaza border on March 30. There have been no Israeli casualties.

The Jewish state maintains a crippling blockade of Gaza it says is necessary to isolate Hamas.

Critics say it amount to collective punishment of the territory’s two million residents.