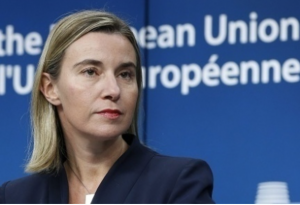 While its supporters, including Prime Minister Benjamin Netanyahu, say the law is meant to increase transparency, it applies almost exclusively to liberal groups, often funded by the EU, that are critical of Israeli policies toward the Palestinians. More hawkish groups are largely exempt because they tend to receive funding from private individuals.

The Israeli government has long accused the EU of meddling in Israeli affairs by funding such groups. European officials say it supports groups that promote democracy or help the Palestinians to develop their economy and governing institutions as a step toward establishing an independent state at peace with Israel.

In a statement Tuesday, the EU said the new law goes “beyond the legitimate need for transparency,” and seems “aimed at constraining the activities of these civil society organizations working in Israel.”

“Israel enjoys a vibrant democracy, freedom of speech and a diverse civil society which are an integral part of the values which Israel and the EU both hold dear,” it added. “This new legislation risks undermining these values.”

In Washington, State Department spokesman John Kirby said the US was concerned the legislation could have a “chilling effect” on the activities of non-governmental organizations.

He said President Barack Obama has made clear that “a free and functioning civil society is essential and governments must protect freedoms of expression including dissent, association and create an atmosphere where all voices can be heard.”

Israeli nonprofits were already required to report their sources of funding to a state registrar, and such information appears on their websites.

The new law requires them to state that they rely on foreign funding in all communication with public officials and on TV, newspapers, billboards and online. Representatives of these groups must also declare they depend on foreign contributions to the heads of Knesset committees when participating in meetings. An additional proposal that would have required their representatives to wear special badges in the Knesset building was dropped.

Israeli nonprofit groups reacted angrily Tuesday. Adalah, a group that promotes the rights of Arab citizens of Israel, said the law “is intended to persecute and incite against human rights organizations, a practice which is characteristic of dark regimes both past and present.”

But Gerald Steinberg, president of NGO Monitor, a watchdog group that has pushed for greater transparency of foreign-funded nonprofits, said the complaints were overblown and the law would have little impact.

“This law is strictly symbolic and political,” he said. “There are essentially no new restrictions.”

Steinberg said he believes the best solution would be for Israeli and European lawmakers to hold a dialogue and together set guidelines for how money should be spent.