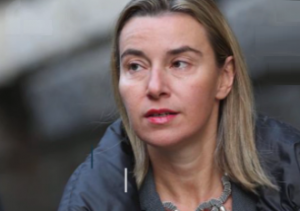 The European Union, a member of the Middle East Quartet along with the United States, the United Nations and Russia, believes it has a duty to make its voice heard as the Palestinians’ biggest aid donor and Israel’s top trade partner.

“The European Union has a clear and united position. We believe the only realistic solution to the conflict between Israel and Palestine is based on two states and with Jerusalem as the capital of both,”  Federica Mogherini told a news conference.

She said she would meet Jordan’s foreign minister on Friday, while she and EU foreign ministers would discuss Jerusalem with Israeli Prime Minister Benjamin Netanyahu in Brussels on Monday.

“The European Union will engage even more with the parties and with our regional and international partners. We will keep working with the Middle East Quartet, possibly in an enlarged format,” said Mogherini, citing Jordan, Egypt and Saudi Arabia, as well as Norway. “We remain convinced that the role of the United States … is crucial,” she said.

Mogherini, who also spoke to Palestinian President Mahmoud Abbas, threw her weight behind Jordan’s King Abdullah, saying he was “a very wise man” that everyone should listen to as the custodian of the Muslim holy sites in Jerusalem.

Trump’s decision stirred outrage across the Arab and Muslim world and alarm among US allies and Russia because of Jerusalem’s internationally disputed status, and the Palestinian terrorist group Hamas urged Palestinians to abandon peace efforts and launch a new uprising against Israel.

Mogherini stressed all 28 EU governments were united on the issue of Jerusalem and seeking a solution envisaging a Palestinian state on land Israel took in the Six Day War, but policy divisions within the bloc have weakened its influence.

“This is the consolidated European Union position,” she said, saying EU foreign ministers made that clear to US Secretary of State Rex Tillerson on Tuesday in Brussels.Hurdles for the EU include its range of positions, ranging from Germany’s strong support for Israel to Sweden’s 2014 decision to officially recognize the state of Palestine.

The EU is also perceived by some in Israel as being too pro-Palestinian, partly because of the EU’s long-held opposition to Israeli settlements in the West Bank, diplomats say.