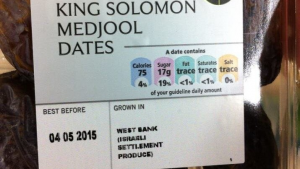 He said Israel received assurances the move “is not a political step to determine future borders or to boycott Israel.”

The conversation between Netanyahu and Mogherini followed a negotiation process on the issue led by Foreign Ministry Director General Dore Gold. After the agreement was reached, Mogherini invited Netanyahu to Brussels, an offer which he accepted.

The European Commission’s original labeling resolution was set to be adopted by all 28 member states and to include goods manufactured in the Golan Heights, Jerusalem and Judea and Samaria.

In November, Israel suspended contacts with EU officials on the political process with the Palestinians to protest the move.

Under the new agreement, the EU said it will leave product-labeling decisions up to each individual member country.

Israel has said that it will continue to fight bids to label products in each country that intends to do so.

The EU also promised that it would not assist in labeling efforts and that it would oppose any boycott or isolation campaigns against Israel. The EU further announced that it is opposed to the boycott, divestment and sanctions movement, that it is dedicated to Israel’s security and that it condemns terrorism and incitement to violence.

In response to the move, Nahshon said that Israel would no longer insist on the exclusion of EU bodies from peace talks with the Palestinians.

“The conversation resolved the tensions and we are, Israel and the EU, back to good and close relations,” Nahshon said in a message to the media.

Speaking to Israel Hayom about the product-labeling initiative, Gold said: “In addition to the economic damage that it may cause Israeli industries beyond the Green Line, I feel that there was also an attempt here to predetermine the future borders between Israel and the Palestinians when the Europeans had said in the past that the borders would be determined exclusively through direct negotiations between the two sides.

“We received a clear commitment from Mogherini that there is no attempt here to determine the borders between Israel and the Palestinians. Israel stood its ground on each issue discussed with the European Union.”

Meanwhile, Mogherini told journalists on Friday that the Middle East Quartet “was seriously concerned about the viability of a two-state solution”.

The Quartet is represented by Mogherini, U.S. Secretary of State John Kerry, Russian Foreign Minister Sergey Lavrov and a special envoy of the U.N. secretary-general.

“The [Middle East] Quartet expressed its serious concern that current trends on the ground, including continued acts of violence against civilians, ongoing settlement activity and the high rate of demolitions of Palestinian structures, are dangerously imperilling the viability of a two-state solution,” Mogherini told journalists on the sidelines of the Munich Security Conference.

“The Quartet underscored that both sides must swiftly demonstrate — through policies and actions — a genuine commitment to a two-state solution in order to rebuild trust and avoid a cycle of escalation. It emphasized that a robust Palestinian economy and an enhanced government capacity would serve as a cornerstone of a Palestinian state and that genuine Palestinian unity on the basis of democracy and the PLO principles is essential to uniting Gaza and the West Bank under one legitimate democratic Palestinian authority,” she added.