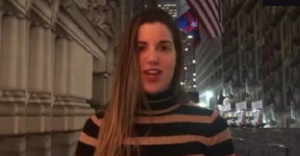 Levine and her mother were attending a lecture in February 2019 called “The Hundred Year’s War on Palestine” by Rashid Khalidi, a former press officer for the Palestinian Liberation Organization.

According to the lawsuit, Levine stood up during the lecture and “peacefully asked during a question-and-answer session how Middle East peace could be achieved if Palestinians are taught to support terrorism against Jews and Israelis.” From there, the audience allegedly “erupted in a mob-like fury” over her question.

The question ignited a “mob like fury” during which Faris Mousa Saah, Muslim Harvard finance minister, allegedly “called her a ‘slut’ in Arabic and grabbed her by the arm, bruising it as he tried to take the microphone.”

However Levine did not get her questions answered, as security made her and her mother leave. They were followed out by upset lecture attendees, taking photos of her and chanting, “We’re going to get you expelled.”

Once Levine cleared the building and made it outside she filmed herself talking about the incident. She posted the video to Facebook, garnering over 58,000 views.

“All I did was ask a simple question, and right when I got up, a grown man my father’s age, got up, and tried putting his hands on me, he tried taking the microphone from me,” Levine said in the video.

According to court papers, Saah later claimed that he feared Levine would hurt Khalid, as she was “aggressively and maniacally” wielding the microphone. In an interview with the Post, Saah doesn’t recall being at the lecture, “There’s not a single word of accuracy in any of that,” he said of Levine’s charges.

The Harvard’s board of trustees demanded that Levine take down the video off of Facebook, she refused, and the board of trustees summoned her to a hearing where they responded by kicking her out of the club. They refused Lavine’s lawyers in the hearing and did not give the names of the witnesses, according to Levine’s version of events in the court papers. They dismissed not only her assault claims, but those confirmed by internal security reports.

A spokeswoman for the Harvard Club claimed Levine “disrupted a Club program. She was subsequently removed from membership in accordance with the Club’s bylaws.”

“It was beyond comprehension that she would be expelled. She didn’t touch anybody. She didn’t slander anybody,” said the lawyer, who is not related to Vanesa.

“Apparently one side is very hateful,” Levine said in her video. “The other one is looking for answers and for solutions.”

The Harvard Club is a private social club of 154 years, based in Manhattan, notable past members of which include John F. Kennedy, Reginald Lewis, and Franklin D. Roosevelt.