Female Turkish Blogger writes: The truth of the matter

Aylin Kocaman explains that according to the Koran, it is the right of the Jews to live in the Land of Israel.

By AYLIN KOCAMAN
Most people around the world know very little about the real Islam and the real Muslims.

What is presented to them under the name of Islam is a religion of war full of fear, hatred, rage and blood. It is a religion of fear formed by those who are in favor of war, societies of fear and suicide bombers. The alarming part is that some Muslims also think that this is the case. They are unaware that attacks, murders, suicides, instilling rage and fear instead of love in people’s minds is unlawful, for they are totally unaware of the content of the Koran. What is underlying this problem? Lack of education, and ignorance. 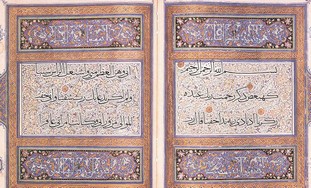 WASATIA is a term from the Koran meaning ‘balance’ – Photo: Courtesy

It is easy to impose superstitions on a person who is unaware of his own religion.

In the mind of such a person, superstitions replace the true religion, turning it into a form of bigotry. Bigotry is not a threat for Islam only but a threat for all just religions. Those who do not practice just religion in compliance with the Book and put forward the fake religion as a just religion pose the greatest danger, for they appear in the name of God. And the great pity is that they have followers.

Remember when Moses said to his people, ‘My people! remember God’s blessing to you when He appointed Prophets among you and appointed kings for you, and gave you what He had not given to anyone else in all the world! ‘My people! enter the Holy Land which God has ordained for you. Do not turn back in your tracks and so become transformed into losers.’

If a person acts in compliance with the Koran, he has to be a person of love. A person following the Koran cannot murder.

He cannot become a suicide bomber. He cannot give aggressive messages full of hatred. A person who complies with the Koran cannot feel rage for anyone. However, if what he considers to be his guide is the superstitions of bigots, then he can readily commit these outrageous acts; whereas this is impossible for those who are guided by the Koran.

Some of the disagreements that have been going on in the Holy Land for long years stem from some Muslims’ ignorance of the provisions of the Koran. According to the Koran, Jews have the right to live in the Holy Land. The related verses of the Koran are as follows: “We said to the tribe of Israel after that, ‘Inhabit the Land and, when the promise of the hereafter comes, We will produce you as a motley crowd’” (Surat as-Isra, 104) “Remember when Moses said to his people, ‘My people! remember God’s blessing to you when He appointed Prophets among you and appointed kings for you, and gave you what He had not given to anyone else in all the world! ‘My people! enter the Holy Land which God has ordained for you. Do not turn back in your tracks and so become transformed into losers’” (Surat al-Maida, 20-21) If a person who claims that he is a Muslim says, “We will wipe Israel off the map,” or “We will drive the Jews from those lands,” this means that he does not speak in compliance with the Koran. This is against the provision of the Koran commanding Muslims to live in peace with Jews and be friends with them, and violates the commands of the Koran about the Holy Land. This is precisely the peril of bigotry and ignorance that we have been speaking of.

Just as it is depicted in the Torah, according to the Koran, too, Jews must surely remain in the Holy Land. Indeed, the existence of the Jews in the Holy Land is beautiful; a cause of joy for genuine Muslims.

But God stipulates a condition for genuine believers both in the Koran and the Torah: Peace.

IN THE Holy Land Jews, Muslims and Christians have to exist together, and peace and love must reign in that region.

They will be brothers. Those lands are sufficient for everyone. No one will be driven from his homeland, forced to leave his home.

People have always been pushed into hardships while there is the easy way for doing it. They have declared wars, committed mass killings, driven people from their lands. However peace and love is the easiest way. In order to establish all these, factors hindering peace and love must be established. The greatest obstacle is bigotry and ignorance.

What is the solution? The people of the region must be educated by the people who know the essence of the Koran and the Torah. Muslims must get rid of their outlook which has been formed under the influence of bigots. Jews must not confuse bigotry with Islam. When they meet an aggressive act, they must be aware that this does not stem from Islam but from bigotry. They must embrace the Koran and the Torah in order to eradicate bigotry – which is the greatest peril to both Islam and Judaism – in the ideological sense. If they want conflicts and disorder to end, they must pioneer in explaining the provisions of the Koran and helping people to grasp them.

All this may seem difficult, but actually it is not. This is what God wants from us.

There are afflictions in the world because people do not attach importance to love and solidarity. However God is the One Who loves love. He also loves who loves love. And those who love love always triumph.

When those lovers of God and lovers of love come together, the anti-Messiah loses its power.

Right now the anti-Messiah derives its power from the disintegration of believers.

That is why it stirs up conflicts and oppositions.

Aylin Kocaman – Photo: from her blog

About the Author:
Aylin Kocaman graduated from Istanbul University, and is a commentator and religious and political analyst at A9 TV Istanbul/Turkey. She is host of the Building Bridges show with the cooperation of US Network WTPN, a columnist for several online newspapers in Turkey, and a peace activist.

Read her blog at: http://aylinkocaman.blogspot.in/

On a similar line of thought, I found an interesting clip.

It’s very unfortunate that so many YouTube clips of an Islamic cleric talking about Jews only shows their bigotry and lack of any formal education. The internet has way too many of these tasteless clips.

Here, the Islamic religious leader of Italy’s largest Muslim community is interviewed. The dialogue is in (perfect) English and extremely informative.

As a Jew, to me it’s heartwarming to listen to an Islamic Cleric that preaches ‘Co-existence’.