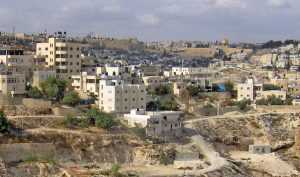 “We are returning to normal life in Judea and Samaria,” Defense Minister Avigdor Liberman said in a statement announcing the plans.

According to the statement, Liberman and Prime Minister Benjamin Netanyahu agreed to approve plans for the units in order to enable normal life and answer local housing needs. Netanyahu said, “We are building, and will continue to build.”

Ariel, one of the four largest Jewish towns in the West Bank – Wikimedia Commons

Most of the new units will be inside the major settlement blocs, and 100 of those will be in Beit El, in accordance to commitments made regarding providing housing for those evacuated from Migron in 2012.

Liberman said that in parallel to these moves, he will bring for approval to the security cabinet plans to establish a Palestinian industrial zone near Tarkumiye, south of Hebron. According to the statement, this will be one of the largest industrial areas in the territories.

MK Bezalel Smotrich (Bayit Yehudi) immediately accused Netanyahu of diverting attention away from the initiative to annex Ma’aleh Adumim, a move which the prime minister has said is premature at this time.

“In the best case scenario it’s an attempt to prevent the application of sovereignty on Judea and Samaria, and in the worst case it is laying the ground work for a future Palestinian state,” said Smotrich who co-chairs the Knesset’s Land of Israel Caucus.

“All the communities in Judea and Samaria must be developed, without dividing them into Class A or Class B,” Kisch said. He warned against a policy creating a list of good and bad settlements. Such a designation, he said, “gives the mistaken impression that there could be some kind of map for territorial concessions.”

The plans for the new construction come just a month after the US, under the previous administration of president Barack Obama, enabled the passage of a UN Security Council resolution slamming the settlements as lacking “legal validity,” and as being the primary obstacle to peace and a two-state solution. That resolution was followed by a speech by former secretary of state John Kerry slamming the settlement enterprise.

Trump criticized the UN resolution before inauguration, and top officials in his his team sharply criticized Kerry for his speech.

Netanyahu spoke by phone with Trump on Sunday, and issued a statement afterward saying he expressed his desire to work together with Trump to promote “peace and security” in the region in a way in which “there will be no daylight between the United States and Israel.” He has also said in various forums in recent days that it was very important not to do anything to surprise the new administration.

Liberman’s announcement follows by two days permits granted by the Jerusalem municipality for building 560 units in Ramot, Pisgat Ze’ev and Ramat Shlomo, all Jerusalem neighborhoods outside of the pre-1967 lines.

While Germany and France both swiftly condemned that move, the US was noticeably quiet, a sharp contrast with the Obama administration, which slammed all new building beyond the Green Line. Jerusalem believes that there will be far less opposition by the current administration to new building in Jerusalem and the settlement blocks, than there was for the last eight years under Obama.