A win in the ongoing New York trial represented by Shurat Hadin against the Palestinian Authority, would signal a plaintiff-friendly playing field for filing further terrorism cases in the US.

The stakes are high.

A win by the plaintiffs in the first terrorist trial against the Palestinian Authority could mean a multi-billion dollar judgment, a major diplomatic setback for the PA and possibly even reduce the PA’s enthusiasm for using the legal arena to pressure Israel. 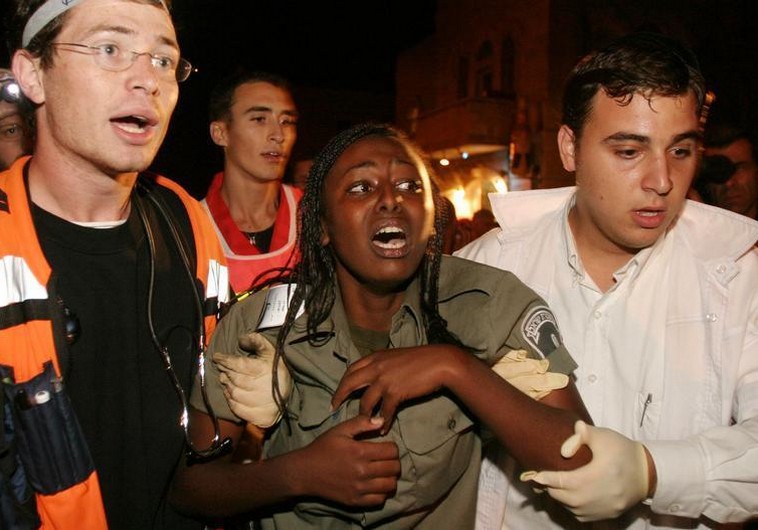 An Israeli Border Policewoman is helped by rescuers after she was injured in a suicide bombing. – Photo: REUTERS

Coming only months after the September 23 verdict against Jordan’s Arab Bank for terrorism financing, a win against the PA would signal a clear, more plaintiff-friendly playing field for filing US terrorism cases, despite years without a high-profile victory.

A win by the PA would end a legal saga dating back to 2001-2004, during the second intifada, and block the US terrorism trial’s momentum, leaving the future of that enterprise in a cloud of uncertainty.

Represented by Shurat Hadin – Israel Law Center and Kent Yalowitz of Arnold & Porter, the plaintiffs’ central points are that a significant number of PA employees, including numerous policemen and commanders, have been arrested and convicted by Israel as having organized, planned and perpetrated suicide bombings and shootings against Americans in Israel, including the six attacks from 2001-2004 in the case during the second intifada.

They said that the terrorists, many convicted in Israel’s military West Bank courts, continue to get salaries and stipends from the PA despite the fact that they are sitting in Israeli jails for murder, attempted murder and membership of terrorist organizations.

Next, they presented evidence that these convicted terrorists receive regular promotions in rank from the PA as they sit in jail.

Also, they brought evidence that the PA pays “martyr” payments to the families of suicide bombers and other terrorists who are killed in terrorist attacks.

But after presenting all of this evidence, the plaintiffs still needed to connect the dots, and the PA has put on a spirited defense that in each case its higher-level decision-makers were uninvolved and did not know about the attacks, or that aspects of the evidence could be interpreted as justifiable liberation-movement style resistance, not terrorism.

Along that line, the PA brought testimony from a number of top officials favored by the West, including PLO executive member Hanan Ashrawi, the head of the “PA’s CIA” Maj.-Gen. Majid Faraj and, reportedly, a range of other Fatah officials, human rights experts and Palestinian cultural icons.

Their witnesses accused Israeli attacks, including on PA police stations, of making enforcing the law and keeping terrorists incarcerated difficult, though Faraj said that PA forces still did their best to fight and stop Hamas terrorism.

The plaintiffs believe they have proved that “providing material support and resources” should be interpreted as providing inducement payments to families of the “martyrs” after an attack has been carried out.

The defense responded that financial payments to terrorists’ families did not signal support for terrorist acts, but for the families who, though innocent, were left without a wage earner and whose loyalties were being competed over by terrorist groups.

A key interim win for the plaintiffs was convincing New York federal District Court Judge George B. Daniels to accept into evidence IDF military court convictions as legitimate evidence in the case.

The plaintiffs have also had an emotional advantage, with victims giving heart-wrenching testimony about the impact of terrorism on their families.

Shurat Hadin said after one victim’s testimony that, “Jurors left the courtroom openly crying. There was not a dry eye in the house. Even the PLO representatives at the trial were tearing up.”

In one of several attempts to blunt plaintiffs’ momentum or seek mistrials on a variety of issues, the PA’s lawyer implied that a crying juror might be biased, but was rebuked by Daniels, who said he has had jurors cry in his court before.

The plaintiffs had many hoops to get through to have a chance in this case and seem to have jumped through all of them, including beating back a pretrial attempt to get the US Supreme Court to halt the case.

If the jury rules based on emotion, the plaintiffs will likely win hands-down.

If the jury views the issues more analytically, it could be a closer call and will depend on whether they assess the PA’s claims of a lack of control of some rogue employees and of payments being for terrorists’ family support, rather than to support terrorism, were credible.