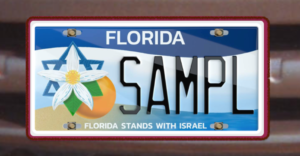 Florida Governor Ron DeSantis authorized the creation of the “Florida Stands with Israel” license plate on the eve of Rosh Hashanah. The designer suggested that “the license plate would make a great Hanukkah gift…Displaying it could make you feel proud, like the Maccabees.”

The public design contest for the “Florida Stands with Israel” specialty license plate, sponsored by the Israeli-American Council (IAC), has ended and the winning concept — out of more than 100 submitted — was by artist Daniel Ackerman, a graphic designer from Boca Raton, Florida.

Ackerman’s design, which was unveiled on Tuesday, features an orange blossom and an orange with a blue Star of David in between them against a background of desert sand and sea, above the words, “Florida Stands with Israel.” It will adorn a specialty license plate that will go into production once 3,000 pre-sale vouchers have been sold. A portion of the revenue generated by sales of the new specialty license plate will benefit Hatzalah of Miami-Dade, inc., a nonprofit that deploys community-based, state-certified volunteer paramedics to slash response times and increase survival rates in medical emergencies.

Florida Governor Ron DeSantis signed HB 1135, authorizing the creation of a “Florida Stands with Israel” specialty license plate in September on the eve of Rosh Hashanah. HB 1135 enjoyed bipartisan sponsorship and passed through both the Florida House and Senate unanimously. The “Florida Stands with Israel” auto tag included in HB 1135 was originally submitted to the House in a separate bill co-sponsored by Florida House Minority Leader Kionne L. McGhee (D) and Representative Scott Plakon (R).

Ackerman explained his design concept: “The concept focuses on Florida’s state flower – the orange blossom. The beauty of this flower contrasted against the Star of David in the form of a tropical leaf, represents the Florida-Israel relationship and the fruit this partnership bears, ultimately benefiting both states. The symbol interacts with the two waves on top and bottom giving nod to the Israeli flag, Florida’s sandy tourist destinations, and Israel’s deserts in bloom.”

Thirty-year-old Ackerman, who has been drawing and painting since childhood, said, “Good design starts with good research.” It was important to him to combine symbols and images that were relevant to both Israel and Florida — such as the orange — “in a simple and memorable way that hadn’t been done before.”

He said that this was a meaningful project for him, since he comes from a Jewish family and spent a year in yeshiva before going to college and visited Israel again two years ago after recovering from Hodgkin’s lymphoma. He is especially happy that the proceeds will go to Hatzalah.

“With everything going on with corona now, it was so important to be able to create something that is going to contribute to an organization that is giving medical care to people who really need it right now.”

He suggested that the license plate would make a great Hanukkah gift and that it could “shine a light against antisemitism… Displaying it could make you feel proud, like the Maccabees.”

“The Florida-Israel relationship is a special one that ranges from trade to culture and contributes to quality of life for all Floridians. The two countries share many ties, including bilateral trade, common values, and leadership in cutting edge fields,” Israeli-American Council co-founder and CEO Shoham Nicolet and IAC board member and IAC for Action board chairman Shawn Evenhaim said in a statement.

“Florida has been a leader over the years in the fight against anti-Jewish hatred and discrimination, and we sincerely appreciate this meaningful expression of solidarity. Bravo to the citizens of Florida, their legislature and Governor DeSantis for approving this specialty license plate. We applaud the efforts of the sponsoring legislators who made this happen. We also thank our friends at Artists 4 Israel and the Broward Jewish Federation for their co-sponsorship in this campaign.”