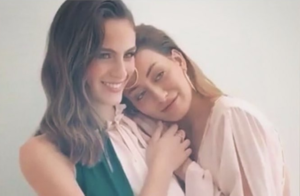 Now living in the U.S. after Sarah Idan’s family was forced to flee Iraq because of death threats over her selfie with Miss Israel, the Iraqi-born beauty queen accepted an invitation to visit the Jewish State to continue her messages of peace.

Iraqi-born beauty queen Sarah Idan — whose selfie and unlikely friendship with Miss Israel Adar Gandelsman during the 2017 Miss Universe pageant earned her family death threats and forced them to flee their native country — made an extraordinary visit to Israel where she was praised for her bravery and message of peace.

A Hadashot television news report which followed Miss Iraq on a tour of Jerusalem’s iconic Machne Yehuda market showed the 26-year-old being showered with praise by Israeli fans.

One woman thanked Idan “for being so brave” calling her “an inspiration to all the women in the world.”

Another Israeli woman, of Jewish-Iraqi descent, told Idan she hopes one day to return to Iraq to which Idan replied “Inshallah,” or God willing.

“It actually felt weird — the people look like my people. And the city looks like Damascus, like Syria, and I’ve been there, so everything seems familiar to me,” Idan said of her visit to Jerusalem.

Idan, who lives in the United States, withstood a torrent of backlash in 2017 after she posted a selfie with Gandelsman with the caption “Peace and Love from Miss Iraq and Miss Israel”.

Idan’s family was forced to flee Iraq after receiving death threats over the selfie as well as photos of her modeling in a bikini. Idan told Hadashot that she was surprised by the backlash sparked by the viral photo.

“I did not think it would blow up like this when I took this picture,” she said. “I lived for many years in the US, I have many friends who are Jewish or Israeli, I don’t think about people like that.”

“I cannot go to Iraq anytime soon,” as a result of the controversy, she said. “That’s a price I paid and also my family paid since they were forced to leave the country.”

The TV report captured Idan’s reunion with Gandelsman and the two posted a number of new photos together on their social media accounts. Both women’s Instagram pages were subsequently hacked.

Idan recounted the first time she met Gandelsman at the Miss Universe pageant, saying that the Israeli beauty queen had told her: “I’m scared to talk to you.”

“After that, we sat down and talked for hours and hours, and the Miss Universe staff got really angry at us, telling us ‘come on, we have a photo-shoot,’” she recalled, smiling.

Idan said that the people of Iraq and Israel are not enemies.

Her visit to Israel came at the invitation of the American Jewish Committee, and the AJC’s Israel chief Avital Leibovitz who said “it had taken “several pretty long conversations to convince her to come to Israel.”

“She really wanted to, but was a bit afraid,” Leibovitz told Hadashot.

Iraq and Israel have no diplomatic ties and Baghdad contributed forces to Israel’s wars with Arab states in 1967 and 1973. Saddam Hussein also peppered Israel with missiles during the 1991 Gulf War.

More recently, Israel was seen as backing the Kurds’ attempts to carve a breakaway state out of Iraq’s north, although this may have not troubled Idan, who is a Kurd herself.