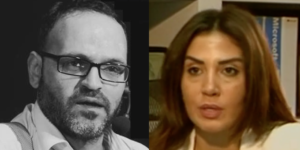 Itani was accused of being recruited by a female Israeli intelligence agent and that the two exchanged information. According to reports in Lebanon, he was asked to contact senior Lebanese political officials in order to advance normalization with Israel.

Maj. Susan Hajj Hobeiche, the former head of the Lebanese Anti-Cybercrime and Intellectual Property Bureau who was arrested. – Screenshot: YouTube

The agent allegedly sent him a list of 29 names of Lebanese government ministers in order to determine which of them Itani knew. In addition, it was announced that Itani received between 500 and 1,000 dollars a month for his services and that he admitted to the charges under questioning.

Susan Hajj was arrested on charges that she hired a hacker to forge the conversations between Itani and the Israeli agent in order to frame Itani, whom she blames for her ouster from her previous post, as a spy for Israel.“We all must ask forgiveness from Itani who has never abandoned his Arab and Beiruti identity for a single day,” said Interior Minister Nouhad al-Mashnouk on Twitter. “It is not enough to declare his innocence. He is a patriot and we are proud of him.”