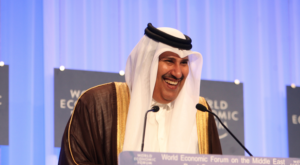 In a statement posted to Twitter, Sheikh Hamad Bin Jassim declared: “On December 14 last year, I posted a tweet in which I spoke about the deal of the century and said that it would be announced at the beginning of this year.

“Now it will be followed by a non-aggression agreement between Israel and the countries of the Gulf Cooperation Council in addition to Egypt, Jordan and possibly Morocco.”

The former Qatari politician noted that he was “not against” such an agreement with Israel, and believed the unanimous decision taken by the Arab League to reject the deal last week was not in the best interest of the region.

“Although there are Arab countries that promised the American side that they would take a positive position on the deal, but they did not, and they justified this by saying that they could not because of the media,” said Jassim.

He added that “the Arab side follows a policy based on short-term tactics, while the Israeli side places its policies on long-term strategic foundations.”

This article was originally published by i24NEWS