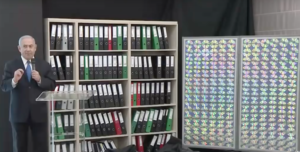 In January, U.S. President Donald Trump gave France, Germany and Britain three months to revise what he has called “disastrous flaws” in the accord, also known as the Joint Comprehensive Plan of Action.

Federica Mogherini with foreign affairs ministers from the US, UK, Russia, Germany, France, China & Iran negotiating a agreement on the Iranian nuclear programme. – US Dept of State

EU policy chief Federica Mogherini on Tuesday downplayed the information presented by Prime Minister Benjamin Netanyahu, saying, “What I have seen from the first reports is that Prime Minister Netanyahu has not put in question Iran’s compliance with the JCPOA commitments, meaning post-2015 nuclear commitments.”

However, the French Foreign Ministry said Tuesday that the information obtained by Israel could be used to promote revisions to the deal or to formulate a complementary, long-term agreement with Iran.

“The information should be studied and evaluated in a detailed manner,” a spokeswoman for the French Foreign Ministry said. “The new information presented by Israel can confirm the need for long-term guarantees regarding the Iranian nuclear program, as President Macron suggested.”

Since returning from Washington, Macron has spoken by phone with the Israeli, Russian, British, German and Iranian leaders, lobbying for an extensive revision of the nuclear agreement.

Macron believes the deal needs to be broadened to cover areas such as ballistic missiles, what happens when the deal expires in 2025, and Iran’s destabilizing activities in the Middle East.

According to Channel 10 News, French, British and German intelligence experts are scheduled to arrive in Israel over the weekend to study the documents. The three countries have expressed their support for the existing nuclear deal.

German security experts said Wednesday that it is highly likely that Iran is still pursuing nuclear weapons and is trying to buy components from German companies with which to build missiles that can carry nuclear warheads.

Maas called on the International Atomic Energy Agency to conduct an “accurate examination” of the information Israel unveiled, saying the 2015 pact “is not based on trust and faith, but on meticulous supervision. The IAEA should be granted access to the Israeli information without delay and find out whether there is any evidence of a breach of the  agreement.”

But he stressed that Germany opposes terminating the agreement, saying, “Since we cannot allow Iran to obtain nuclear weapons, we must maintain the supervision mechanisms of the agreement.”

The IAEA has so far declined to directly address Netanyahu’s accusations.

“In line with standard IAEA practice, the IAEA evaluates all safeguards –relevant information available to it,” a spokesman said. “However, it is not the practice of the IAEA to publicly discuss issues related to any such information.”

In a report issued in December 2015, the IAEA said that “a range of activities relevant to the development of a nuclear explosive device were conducted in Iran prior to the end of 2003 as a coordinated effort.”

Those activities continued after 2003, though in a less coordinated manner, and there was no credible indication of any beyond 2009, the IAEA said in that report. The spokesman’s statement on Tuesday reiterated the 2015 report’s findings.