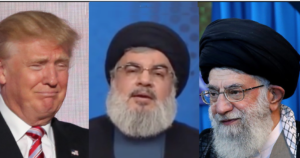 With weeks to go until the deadline to make a decision, the debate inside the Trump administration is heating up. The choice involves whether to continue to allow eight foreign nations to go on selling oil to Iran via waivers that allow them to legally evade the sanctions the United States reimposed when U.S. President Donald Trump pulled out of the nuclear deal with Tehran.

But ironically the argument for ending the waivers got a boost this week from a source that is hostile to Trump’s tough policy towards Iran: The New York Times. In an article filed by Beirut bureau chief Ben Hubbard, the Times reported that, contrary to the predictions of Trump’s critics, the sanctions that have been enforced in the last year have had a discernible impact on the Iranians. Among those most feeling the pinch from the austerity imposed by American restrictions on commerce with Iran are the terrorist groups that it funds.

According to the article, the sanctions have created an economic crisis for Tehran that has caused it to cut down on the money it spends on funding terrorists, as well as the barbarous Bashar Assad regime that it has helped prop up via military intervention in the Syrian civil war.

As Hubbard wrote: “The golden days are gone and will never return,” said a fighter with an Iranian-backed militia in Syria who recently lost a third of his salary and other benefits. “Iran doesn’t have enough money to give us.”

Even Hezbollah leader Hassan Nasrallah conceded the impact U.S. sanctions have been having on the ability of his Iranian masters to fund his group’s misdeeds. He lamented that the sanctions are “a form of war” and implored members of his group tasked with “fundraising” – a term that has a very different meaning for the Shiite terror group than for charitable organizations that don’t consider kidnapping and extortion an essential element of their appeals – to redouble their efforts.

The Obama administration lifted sanctions and gave thousands of waivers to companies and countries to do business with Iran, despite U.S. laws that forbade such conduct. The Trump administration has tried to shut down both legal methods of commerce with the ayatollah’s regime, as well as ferreting out illegal scams. Just this week the Treasury Department announced that it had disrupted a billion-dollar currency trading scheme that Tehran used to help fund its military adventures on the part of the Iranian Revolutionary Guard Corps.

But so long as Iran still is able to count on countries like China, India, Japan, Turkey, Italy, Greece, South Korea and Taiwan to buy its oil, it will retain the ability to go on funding terror and military efforts aimed at achieving regional hegemony. That money also enables these brutal theocrats to help keep the restive Iranian people from threatening the regime.

With the Iranian economy tanking, this would seem to be exactly the right moment for the United States to tighten the noose around Tehran to the point where even countries like France and Germany, which have put their own financial interests above that of the collective security of the West, will understand that they must stop trying to prop up their Iranian business partners.

But in spite of the success, the U.S. sanctions have achieved, the Trump administration is reportedly split on the issue of ending the oil-sale waivers. According to one report published in Bloomberg, the argument has pitted National Security Adviser John Bolton against the State Department.

The argument against ending the waivers is a matter of economics and politics. Those who are counseling Trump to leave them in place say that cutting off the final sources of Iranian crude could cause a spike in global prices. That threat is made credible by the economic collapse of Venezuela and the sanctions that are being imposed on Nicolás Maduro’s illegitimate socialist regime. The combination of the two could lead to an increase in U.S. gas prices this summer. That would render Trump vulnerable to charges from Democrats that the heretofore-strong economic performance he has presided over is about to take a turn for the worse.

That’s why some of his advisers are cautioning him to show patience and slowly build the sanctions under the assumption that he has six years to squeeze the Iranians, rather than just two.

Against that are arrayed the arguments of both the National Security Council and chief economic advisor Larry Kudlow. They say that with oil now at rock-bottom prices due to the glut on the market, there will never be a better moment to pressure Iran.

The question of whether Trump really has only until January 2021 to accomplish his mission of rolling back Obama’s appeasement of Iran is not one that can be answered now. But the notion that the United States can carry out a policy aimed at isolating the regime in a half-hearted fashion is not one that makes sense. The goal of the administration is to force Iran to cease its ballistic-missile tests, end its support for terrorism, roll back its effort to create a land bridge to the Mediterranean and be dragged back to the table to renegotiate the disastrous nuclear deal that gave it a legal path to a bomb. None of that is possible while the waivers stand.

Obama enriched Iran by unfreezing assets and ending sanctions. That put weapons and money in the hands of Hezbollah and the IRGC. That also helped other terror groups, such as the Palestinian Islamic Jihad and the Houthis in Yemen, create more grave threats to regional security.

As Hezbollah’s complaints prove, the first stage of sanctions has begun to work. If Trump is to finish the job, he can’t be held back by what may be an illusory threat of gas-price hikes and let the ayatollahs off the hook now that he has their backs to the wall.

This article was reprinted from JNS.org.