German Federal Court rules against intelligence services releasing classified Eichmann files that may reveal the post-war gov’t knew of his whereabouts and gave assistance to Israel’s Mossad in apprehending the Nazi official in Argentina.

A German court has prevented the publication of secret intelligence documents regarding the senior Nazi official Adolf Eichmann, the British paper The Daily Mail has reported. 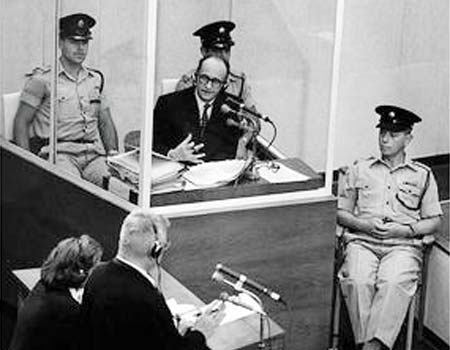 Assessments believe that the documents reveal that the West Germany’s intelligence knew of the Nazi officer’s post-war whereabouts, and had in the passed blocked the publication possibly fearing embarrassing senior German officials’ secret Nazi past

The paper attempted to secure the documents in a bid to prove that West Germany’s intelligence knew, by 1952, that Eichmann was living in Argentina.

They further claim the documents reveals that West Germany’s government was involved in assisting Israel in capturing the Nazi official near Buenos Aires.

In 1960, Eichmann was captured by Mossad operatives in Buenos Aries were he was living with family under an alias, and brought to Israel where he stood trial.

In 2006, the CIA published documents that revealed that already in 1958 officials from the organization contacted their West German counterparts and reported to them Eichmann’s whereabouts.

At the time they claimed Eichmann was living in Argentina under the name Clemens. After his capture it was revealed that he was living under a slightly different name – Ricardo Klement.

The Daily Mail also reported claims that the post-war Adenauer government of Germany wanted to block the publication of the documents, fearing they would reveal embarrassing details about the Nazi pasts of senior officials in West Germany’s government, legal system and civil service.

In response to the current request, the German intelligence said that a majority of the Eichmann related files have already made public, and only a handful remain classified.

According to them the need to leave a number of documents under lock and key stems from the need to protect national security and is protected by laws ensuring the State the ability to do so. An argument the federal court accepted, thus leaving the documents under wraps, barring a handful of details.

Nonetheless, Bild promised to appeal the decision, claiming that it was in Germany’s interest to make the information publically available.