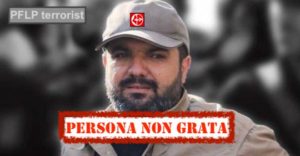 The EU and the US both classify the PFLP as a foreign terrorist organization. Barakat is a senior member of the Popular Front for the Liberation of Palestine, according to the Israeli government.

Barakat also said that Germany cited his opposition to the Oslo peace plan and a two state solution for the Israel-Palestinian conflict, refusal to recognize Israel’s right to exist, as well as his support for the BDS campaign targeting the Jewish state in the 23-page ruling.

The German document outlining the six reason for banning him deemed his refusal to recognize Israel’s right to exist as “antisemitic,” said Barakat.

The German and Austrian parliaments designate BDS as an antisemitic movement.

Barakat said the German ruling also barred him from entering the country because “I could play a role in radicalizing foreigners, which they mean…they have Palestinian communities” and that it “could lead to… tensions between Arabs and Jews in Berlin.”

During the video talk, he said BDS and right of return of all Palestinian refugees are “national constants” of Palestinians.

He claims Germany is not saying that “I engaged in criminal behavior” or that “advocate violence in Germany,” adding the “allegations [against him] are political statements and political arguments.”

It is a “very clear cut case of freedom of expression,” said Barakat about the decision to bar him.

He said his lawyer submitted an appeal against the decision to the German state. In a January press statement entitled “We do everything to prevent antisemitic appearances,” Berlin’s interior ministry said it banned the appearance of Barakat last year.

Samidoun, a Palestinian Prisoner Solidarity Network, that seeks to free convicted Palestinian terrorists, hosted the late March event with Barakat in which he spoke about his case in Germany and the need to secure the release of Georges Ibrahim Abdallah from a French prison. Abdallah is former leader of the Marxist-Leninist guerrilla group Lebanese Armed Revolutionary Factions, from a French prison.

Abdallah was sentenced to life in prison in 1987 for his role in the 1982 murders of US military attaché Charles Ray and Israeli diplomat Yakov Barsimentov in Paris.

He was also involved in as well in assassination attempt on the American diploamt Robert O. Homme, in Strasbourg.

The Jerusalem Post reported last year that the German government permitted Barakat to enter the federal republic in 2018 but pulled the plug on his speaking engagements in June.

In July, 2019, the German police detained Barakat prior to a speaking event about Palestinians that was organized by a number of Arab communities.

Israel’s Ministry of Strategic Affairs wrote in its 2019 report “Terrorists in Suits” that Barakat arranged for Awad to begin his military training in 2015 in Lebanon with Hezbollah, a terrorist organization designated by in the USA, Canada and the Arab League (excluding Lebanon and Iraq), the Netherlands and Japan.”

The UK along with a number of Latin American countries outlawed Hezbollah in 2019.

Mustapha Awad is a PFLP operative trained by the Iranian regime-sponsored Hezbollah. Israel sentenced Awad to one year in prison “for transferring funds between countries for terrorists and maintaining ties with terror organizations. Awad is an activist in the North American-based NGO Samidoun, which works in close coordination with the PFLP for the release of imprisoned Palestinian terrorists and supports the BDS campaign,” said the report.

Barakat is married to Samidoun’s International Coordinator, Charlotte Kates. The Strategic Affairs ministry report said that “The PFLP campaign website uses elements identical to those on the Samidoun website. In light of this, and in light of his connection with Charlotte Kates, it is likely that donations made through the Samidoun website benefited Barakat and the PFLP.”

The Post sent a press query to Berlin’s interior agency on Saturday.