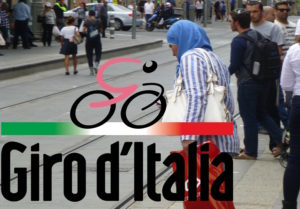 The world’s best riders will start the race in Jerusalem on Friday in the first time a cycling Grand Tour will ever be held outside Europe. It’s the biggest and most prestigious sporting event ever hosted in Israel and features four-time Tour de France champion Chris Froome, who is looking to become only the third person ever to win the three Grand Tour titles in a row.

For Israel, hosting the event marks a major coup and looks to draw tens of thousands of tourists and a chance to showcase its people and landscape to a global television audience.

In its 101-year history, the Giro has previously opened a dozen times outside Italy but never outside Europe. Its arrival in Israel is the result of the lobbying efforts of Sylvan Adams, a Canadian-Israeli cycling enthusiast who conjured the idea to coincide with Israel’s marking 70 years of independence. He said his aim was twofold: to promote the sport in Israel and to project the country’s “normal” image to the world, rather than the typical association of war and conflict.

“This is a mini-Giro, if you will. In three days we can cover a similar percentage of the country as Italy does in the whole race,” Adams told The Associated Press. “We’ll show the beauty of the country, that Israel is a sporting country and that it is open and free and most importantly safe.”

As with anything regarding Israel, though, politics could not be avoided.

The 2018 race will open in Jerusalem, but organizers insisted the route will not go through any land considered occupied by the international community. That means the course will circumvent the West Bank and east Jerusalem. Racers will steer clear of the Old City, the crown jewel of Israeli tourism and home to Jerusalem’s most important Jewish, Christian and Muslim holy sites.

Palestinians have protested the decision to hold the event in Israel, and boycott activists have promised to demonstrate against it.

The Giro itself caused a minor uproar when organizers billed the opening leg as in “West Jerusalem,” angering Israel, which considers the entire city to be its eternal capital. The Giro ultimately reverted back to simply using “Jerusalem,” which in turn enraged Palestinians, who said it served to “legitimize the annexation of Jerusalem.” The Palestinians and their allies have also objected to promotional materials on the Giro’s social media that include photos and videos of the Old City of Jerusalem.

Adams, who has been named the Giro d’Italia Big Start Israel Honorary President, shunned the controversy, saying that at no stage did the course ever intend to pass through the Old City and its narrow, bumpy roads that are unsuitable for racing.

“It’s off-message. This is a sporting event. I don’t want to get into politics. It’s about building bridges through sports,” he said, noting that he hasn’t gotten any negative feedback from potential visitors.

After the 9.7-kilometer (6-mile) opening time trial in hilly Jerusalem, the 167-kilometer (104-mile) second stage will whizz down the Mediterranean coast from Haifa to Tel Aviv. Stage 3 will follow a lengthy 229-kilometer (143-mile) route – the second-longest leg of the entire race – from Beersheba in the Negev desert down to Israel’s southern tip of Eilat along the Red Sea.

The 176 cyclists are made up of 22 teams of eight, including the first two Israelis to participate in a Grand Tour event as part of the inaugural Israel Cycling Academy team. The race will then transfer to Italy, and the island of Sicily, for an early rest day on May 7.

All eyes will be on Froome. A victory at the Giro would make him the seventh rider to win all three Grand Tours – cycling’s top three stage races – and only the third to hold the three titles at the same time. After successfully defending his Tour de France title last year, the 32-year-old Froome went on to win the Spanish Vuelta for the first time.

In a surprise announcement, he then said he was going to participate in the Giro for the first time since 2010.

“The Giro is special and full of history, and I am looking forward to racing it again after almost a decade,” Froome said in a statement. “I’ve had a different start to the season as I’ve obviously been aiming to try and reach my peak quite a bit earlier than usual. But the target of going for a third consecutive Grand Tour has given me new motivation.”

He will also try to win the Tour for a record-equaling fifth time this year. No rider has completed a Giro-Tour double since Marco Pantani in 1998.

Froome, a British cyclist who rides for Team Sky, will be racing in Israel under the cloud of a potential ban after a urine sample he provided at the Vuelta in September showed a concentration of the asthma drug salbutamol that was twice the permitted level. The International Cycling Union’s ruling on the case is expected after the Giro wraps up in Rome on May 27.