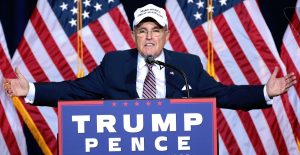 He stepped back, however, from saying whether or not it will happen. “That is something that the president will have to decide. It is under active consideration.”

Asked in an interview with the Post whether he feels that Trump — who was a strong advocate of moving the embassy during the campaign — has changed his mind, Giuliani responded, “I think that now that he is in office, there are a lot more facts and arguments and people you have to consult with before you make a final decision, and it is a more deliberative process. I don’t think his position has changed in any way.”

Giuliani, who Trump recently named as his cybersecurity advisor, said he has spoken with the president about the embassy issue, though he would not say when, or what he said. He did say, however, that he would advise that the move “be worked out carefully with the Israeli government, so that it is done in a way they are comfortable with.”

This, he said, means that it will be done in a way that does not “interfere with anything they are doing or have in mind. It will have a big impact of them, and it should be a decision coordinated with the government of Israel.”

Giuliani is in the country for a few days on business as the global chair of Greenberg Traurig’s Cybersecurity, Privacy and Crisis Management practice. Greenberg Traurig is an international law firm with an office in Israel. He is scheduled to meet Prime Minister Benjamin Netanyahu on his visit, as he does whenever he visits the country. Last year he was here three times.

Regarding the White House’s lack of a comment on Tuesday to the Israeli government’s announcement of plans to build 2,500 additional housing units beyond the Green Line, mostly in the large settlement blocs, Giuliani noted that this was “different than the response that used to happen, a couple of weeks ago, which was almost uniform condemnation of Israel” any time there were announcements about settlement construction.

“No comment is a lot different than saying you shouldn’t do it, or that it is wrong, or hurts the peace process,” he said. “This shows you that there is a different position in Washington than there was before.”

Giuliani said that the “rest of it,” such as the thinking and strategy behind the move is “best left to a private discussion between the president and the prime minister, which can now take place because there is a much closer relationship.”

He said that unlike the situation that existed when Barack Obama was president, Netanyahu “can explain to the president exactly his own views on these different settlements, where they help, where they hurt, what he really thinks.”

And the president, he said, “can relate to the prime minister what he really thinks, rather than communication by press release, which is the way it happened in the past. Israel would do a settlement, and the Obama administration would almost reflexively condemn it.”

Giuliani said that the new administration heralds a significant change of attitude in Washington that is more favorable toward Israel.

“Just exactly what that means and how that is going to play out over the course of maybe 10 different issues might not be exactly what some people who have the most extreme views may want, but I think it is safe to say that there is a much more understanding and supportive attitude in Washington toward Israel than there was before,” he said.

Giuliani added that there is also “a much clearer understanding that there is not a moral equivalence between Israel and the Palestinian Authority, which was something that strongly influenced the Obama administration.”

As to those worried that the “put America first” theme of Trump’s inaugural address may not augur well for Israel, since an argument could be made under this rubric that the $3 billion a year spent on military aid for Israel could be better spent domestically, Giuliani had a simple answer: supporting Israel “fits into [putting] America first.”