Gold given to Ethiopian runner in annual Jerusalem Marathon

Int’l participants have increased, from 800 two years ago to 1,700 on Friday. 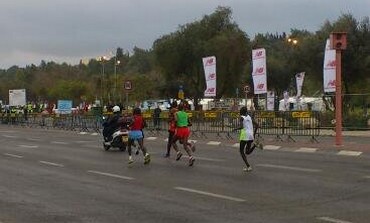 The leaders in the Jerusalem Marathon at the 5k mark, March 1, 2013 – Photo: Melanie Lidman

In second and third place were Luka Kipkemoi Chelimo of Kenya who finished in 2:19:01.95 and Vincent Kiplagat Kiptoo of Kenya who completed the run in 2:20:12.60.

In the women’s division it was also an Ethiopian runner who came out on top ; Mihiret Anamo Anotonios broke the record for female runners with a time of 2:47:26.40. She was followed by Radiya Mohammed Roba of Ethiopia in second place with a time of 3:05:58.15.

In third place was Ellisa Ballas from the US. The 33-year-old runner from Ohio told The Jerusalem Post that she found Jerusalem “hilly but pretty.”

Some 20,000 participants took to the streets of the capital for the full marathon, half-marathon and 10k races.

Roads in an around Jerusalem were closed to traffic beginning at 6 a.m and were set to be reopened after the marathon’s conclusion at approximately 1 p.m.

On Thursday, Jerusalem Mayor Nir Barkat celebrated the marathon’s growth from 11,000 participants in the first year, 2011, to 20,000 participants this year. International runners have also increased, from 800 two years ago to 1,700 on Friday.

Barkat tried to highlight the non-political aspects of the city to the 80 international journalists who arrived to cover the marathon, amid a last-minute call from the Palestinian Authority to runners and sponsors to boycott the marathon for political reasons.

“We hope you’ll be able to convey a different message than what they normally see on the evening news – a message of peace, tolerance and fun,” said the mayor. “We hope you’ll see a brighter picture of what this country has to offer.”

He also personally welcomed Miss Italy 1997 – Italian model, Paralympic athlete, politician and singer Annalisa Minetti, who is running the full marathon. She is blind and will run attached to her longtime running partner.

“Sport is the great therapy of life, and it’s an opportunity to demonstrate your abilities,” Minetti told The Jerusalem Post. She said she had chosen the Jerusalem marathon because of the spiritual connection to running in the Holy City.

“The whole time, I’ve been missing something spiritual in my athletics,” she said.

Minetti, who excels in short distances and won a bronze medal at the 2012 London Paralympics, remained undeterred by Jerusalem’s notorious hills.

“When you run in faith and love, nothing is impossible,” she said.

Those words will be helpful to Barkat, who has decided to run his planned half-marathon despite suffering from a broken rib last week after falling at home.

Elite Kenyan runner Amos Matui, who won marathons in Singapore, the US state of Tennessee, and in Casablanca, Morocco, also said he expected his faith as a Seventh Day Adventist to carry him over the finish line.

“It’s spiritual and exciting to see this ancient city,” he said.

“This is my first time in Jerusalem, and it’s hillier than I expected… we hope to have a good emotional and impressive run.”

The PR firm Thinking in Color, which employs many people with disabilities, approached the Jerusalem Sport Center organization with the idea for a last-place award.

Triathlon champion and runner Ze’ev Neveh, 85, will present the trophies.