The government issued two international tenders Wednesday for the construction and operation of two new private seaports to compete with the existing Ashdod and Haifa ports.  Prime Minister Binyamin Netanyahu declared the move, “the end of monopolies” at the nation’s ports. 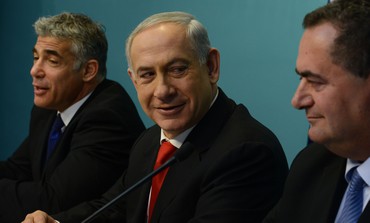 Transportation Minister Yisrael Katz originally announced in May that the tenders would be issued by July 1. On Wednesday he officially issued the tenders at a joint press conference with Netanyahu and Finance Minister Yair Lapid.

“Nobody will stop us. I am not prepared to accept this monopoly, it’s over. I say to the Histadrut that it’s over. Two thousand people will not be allowed to have a strangle-hold on us and shut down the economy at their will. Nothing will deter us.”

He said that the new port projects would bring down prices on consumer goods.

“The decision to establish two ports creates a reality that will enable real competition in Ashdod and Haifa.”

Katz attacked the “monopolies” who run the existing ports for taking advantage of their power for their own benefit. He said that they would have to prepare themselves for a new reality with the advent of competition in the field.

Katz stated that the ports would make Israel an international hub for shipping, especially with it being a center of stability amid regional turmoil.

Netanyahu said at the press conference that great interest had already been exhibited internationally in the tenders.