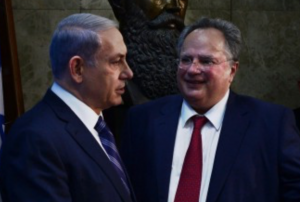 Greek government follows Hungary telling Jerusalem it will defy controversial European Union policy to label only the Jewish-made ‘settlement goods’ of the 200 disputed territorial conflicts around the world.

Greece has informed Israel that it will not label Israeli-made products from Judea and Samaria, following Hungary in breaking with the European Union on the issue.

The decision was made just a few days before the onset of the holiday of Hanukkah, when the Jewish People commemorates its successful rejection of ancient Greek values at the expense of Torah precepts.

“We are two countries with ancient roots,” Netanyahu told Tsipras during the latter’s visit. “In many ways, our modern civilization in the West was forged in Athens and in Jerusalem, and … although we are ancient peoples, we embrace the future, we embrace modernity.”

Hungary, too, has said it will defy the EU labeling guidelines. Hungarian Foreign Minister Peter Szijjarto said his country does “not support [the labeling] decision. It is an inefficient instrument. It is irrational and does not contribute to a solution to the Palestinian–Israeli conflict, but causes damage.”

Germany appears to have not made up its mind as to whether it would label products as “made in the Israeli settlement of the West Bank.” Bundestag President Norbert Lammert said last week, “We could have accepted this decision, if [it] applied to all occupied territories in the world. But since this is an exclusive decision regarding this region, it should not have been approved – and it is even less good that some are implementing it.” The ruling party of Chancellor Angela Merkel also came out against the decision when it was first announced last month.

On the other hand, German’s Foreign Ministry has now announced to the contrary, that it would abide by the new EU labeling procedures.

Israel has strongly criticized the EU decision, calling it discriminatory, tantamount to a boycott of Israeli products, and sorely mis-timed in the middle of a murderous wave of Palestinian terror attacks against Israelis. In protest, Israel has suspended dialogue with the European Union  regarding the Israeli-Palestinian conflict.

Israel’s Foreign Ministry condemned the EU’s “double standard” in focusing on Israel while ignoring 200 other territorial conflicts around the world.

The European Union is reportedly considering a review of the issue when it convenes again later this month.