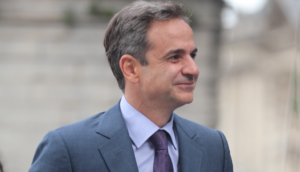 Speaking of Greece’s new PM Kyriakos Mitsotakis, the son of an avid Israel supporter, Israel’s former envoy to Greece predicts “relations between the two countries are sure to improve as Israel has shown itself to be a more reliable ally to Greece, even above the European Union.”

Satisfaction was evident in Jerusalem Sunday, when results of the Greek election became known. The candidate considered a long-time friend of Israel has emerged victorious in the country’s elections, winning almost 40 percent of the vote.

The New Democracy party and its leader, Kyriakos Mitsotakis, expected to receive some 158 seats in the 300-member parliament, a comfortable governing majority.

The prime minister elect had visited Jerusalem in the past year meeting with Prime Minister Benjamin Netanyahu and speaking publicly about his commitment to strengthening relations between the countries.

“I assume the governance of the country with full awareness of the national responsibility,” Mitsotakis said in his victory speech Sunday night. “I know of the difficulties that lie ahead for me and for my associates. But I draw strength from the strength of the people.”

The extremist right-wing Golden Dawn – to have neo-Nazi manifestations – Greece’s third largest party during the height of the financial crisis, failed to make the 3% threshold to enter parliament.

Mitsotakis is the son of Konstantinos Mitsotakis who lead the Greek government in the early 1990s and is credited with upgrading Greek Israeli relations.

Greece was the last European country to establish full diplomatic ties with Israel but its commitment to the Arab cause, which was a major part of its Middle East policy has now changed.

Mitsotakis will assume office in place of his far-left predecessor Alexis Tsipras who contrary to concerns in Jerusalem, proved to be a valuable ally to Israel as well.

Former Israeli ambassador to Athens, Arye Mekel, who is currently a fellow at the Begin-Sa’adat Center, predicts “relations between the two countries are sure to improve as Israel has shown itself to be a more reliable ally to Greece even above the European Union”.