Gross Extravagance for Mahmoud Abbas’ Palace, ‘King of the Refugees’ 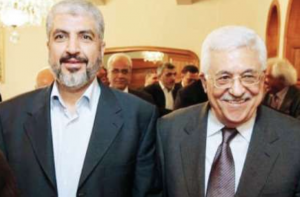 The Palestinian Authority and its collaborators in the mainstream media like to paint the Palestinian-controlled territories as a land oppressed and destitute. But one has only to look at the palatial living standards of the Palestinian leadership to realize something’s fishy.

This week, photos emerged on social media showing the newly completed palace of Palestinian “president” Mahmoud Abbas in Ramallah (pictured below). Many commenters could be excused for at first glance thinking this was an artist’s rendition of the historical and grandiose Jewish Temple in Jerusalem.

Personal residence of Mahmoud Abbas, the leader of the Palestinian Authority. – Photo: Facebook

Plans to construct this princely dwelling were not unknown. Years ago the Palestinian Economic Council for Development & Reconstruction (PECDAR) posted the project details. And in late–2010 Abbas was photographed by the AP as he laid the cornerstone of this new “West Bank” chateau.

But there seemed to be some discrepancies between particulars provided by PECDAR and, well, reality.

First, the Palestinian leadership described the project as a “public facility,” though it is doubtful the average public will ever see its interior. It is listed as a “guest palace,” ostensibly a residence for visiting dignitaries. But that begs two questions: a.) can the cash-strapped Palestinians really afford to be building such lavish “guest houses”?; and b.) if that’s the presidential “guest” palace, what does Abbas’ primary residence look like?!

By way of comparison, here’s a photo of the official, Israeli taxpayer-funded residence of Israel’s prime minister (foreign dignitaries have to stay in a hotel):

The second glaring issue is that PECDAR claims construction of Abbas’ palace was “self-financed.” But as any informed observer knows, the bulk of the Palestinian Authority national budget comes from foreign aid, and even then there’s a huge deficit.

In other words, take a look at the new home your taxes just bought for the head of the PLO!

And, in the meantime, Abbas and his regime are still spending very, very little of that aid to actually boost the Palestinian economy and better the lives of the people he claims to serve.

Several years ago, the Jerusalem Institute of Justice (JIJ) conducted research revealing that since the signing of the Oslo Accords in 1995, the Palestinian Authority had received 25 times more financial aid per capita (considering current inflation) than the citizens of Europe received under the Marshall Plan following World War II.

For those who know their history, the Marshall Plan financially enabled Europe to successfully rebuild following the most devastating war in history.

And yet, having been handed 25 times more cash and resources than post-war Europe, the Palestinian Authority continues to complain of unemployment, a faltering economy and destitute living conditions.

But hey, they’ve got enough to build presidential palaces!