Former Mossad head Efraim Halevy warns that plans being pushed by Prime Minister Benjamin Netanyahu and Transportation Minister Yisrael Katz calling for Chinese involvement in the establishment and operation of a railway line to Eilat, could harm Israel’s strategic agreements with the US, and help China make itself a major world power in line with the US, Yedioth Ahronoth reported.

Within the framework of research carried out for the Environmental Protection Agency regarding a trans Israel railway line from the center of the country to Eilat, the opinion of Halevy was asked on the subject. It can be read in a report released by the Shasa Institute for Strategic Research.

In the paper, Halevy outlines the relationship between China and Iran, highlighting the great Chinese reliance on Iranian oil, China’s extensive investment in Iranian oil, and its interests in Syria – where China is planning to lay down a long track, eventually, connecting China to the Mediterranean Sea via Afghanistan, Pakistan, Iraq and Syria. At the same time, Halevy points to China’s goal of strengthening its economic standing, and explaining that an Israeli-Chinese agreement might bring about issues in Israel’s friendship with the US.

Halevy warns that if China actively controls the track between Eilat and Ashdod, and the port that the government wants to build in Eilat, it will create a situation in which China will control “political and economic pressure points” within Israel.

In his opinion, Halevy said, “China gives substantial support, at times massive, to the extremists from among our enemies. Twenty-two years of diplomatic experience have shown that China refused to respond to Israel’s requests not to supply our enemies with means to further develop of weapons of mass destruction,” 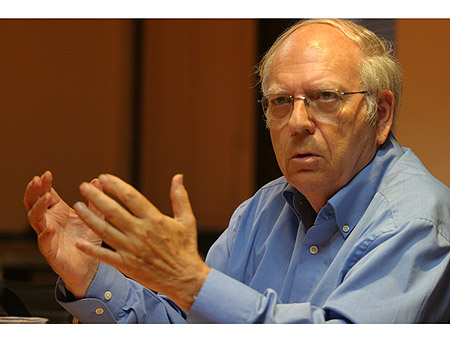 “China is promoting major projects in our area intended to establish points of influence, via the sea and via the ports, which could assist the enemies of Israel, among other things, to greatly increase their capabilities against Israel,” Halevy said. “China has shown that in all related to the war on Islamic extremism terror, it is willing to put up secure banking infrastructure for the use of terrorists who are active against Israel.”

On Sunday, the government is expected to examine the anticipated railway route. The route is considered very problematic in regards to environmental issues, and is expected to physically and visually harm the environment and the landscapes in wide areas of the Negev and the Arava.

Additionally, economic considerations showed that a route including both travel and cargo would not be financially feasible. Netanyahu explained in a government meeting that a railway line to Eilat carries great strategic significance for Israel, which will then become a land bridge between the east and the west, and the line could serve as a replacement to the Suez Canal.

One of the ideas promoted by Netanyahu and Katz was to bring the Chinese into the project. Since the idea was raised, there have been reports published estimating that the Chinese would want to oversee operations, an accepted practice, in many economic projects of this sort.

Minister Katz traveled to China with the intention of pushing the issue, and a memorandum of understanding was signed between the two countries. A few months ago, senior officials from the Chinese infrastructure company were even given a tour along the proposed Eilat railway route.

“It is clear that China is establishing varied transport systems enabling it to increase its field of interest throughout the Middle East, turning it into a major player, with broad strategic interests in the area,” Halevy wrote. He explained that China’s interests create a clear conflict with the US, which is disturbed by it. “China holding the trans Israel railway, owning it and operating it, will not be understood by the US.”

Halevy says that a commercial relationship with China is not to be ruled out, but is against “any action that will bring Chinese control over a main strategic transportation artery in Israel.”