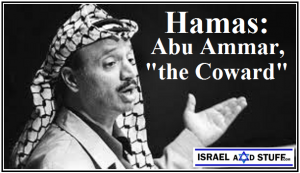 Despite Egypt’s al-Sisi’s talks to unify Palestinian factions, Hamas makes things difficult by exposing Fatah founder’s cowardly history of abandoning the fedayeen in a 1968 battle in Jordan with the IDF.

Hamas and Fatah have remained violently divided despite the unity deal sealed by Abbas in April 2014 when he torpedoed the US-led peace talks.

In recent days – even as Egypt is leading talks in Cairo to try and unify the Palestinian factions – al-Zahar upped the ante on Hamas-Fatah tensions by slamming Fatah founder and arch-terrorist Yasser Arafat for being a “coward” and fleeing a battle with Israel, before later bragging about the battle.

Al-Zahar said that back in 1980 he visited Jordan as part of a delegation of the physicians association, and together with his Jordanian colleagues toured the area where the Battle of Karameh took place in 1968.

In the battle IDF forces raided one of Arafat’s Palestine Liberation Organization (PLO) terrorist camps in Jordan, and engaged in battle with PLO terrorists and Jordanian soldiers.

Al-Zahar asked his Jordanian colleagues why on the memorial plaque for the battle most of the dead listed were Jordanians and not Palestinian Arabs.

According to al-Zahar, they told him: “the Jordanian army are the ones who fought against the Israeli enemy together with the (Palestinian terrorist) fedayeen.”

“At the start of the battle Abu Ammar (Yasser Arafat) drove in a Vespa in the direction of Amman, and when the battle ended the first to return on the Vespa was Abu Ammar, who held a press conference and spoke about the firm stand and the victory in the Battle of Karameh,” he recalled being told.

Arafat, who was born in Egypt, founded the PLO and led Fatah, and is held responsible for many murderous attacks over the decades that killed countless Israelis, including the launching of the 2000-2005 Second Intifada in which over 1,000 Israelis were murdered.