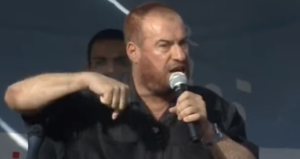 A Hamas official in Gaza has called on Palestinians across the globe to “slaughter Jews” if Israel doesn’t lift its blockade of the coastal enclave by Friday, July 19, and implement its understandings with the terrorist organization.

Hamas political bureau official Fathi Hammad made the comments during a speech at a March of Return rally last Friday, which aired on the Hamas-operated Al-Aqsa TV station and was translated by the Middle East Media Research Institute, a nongovernmental organization that monitors the Arab media.

Hammad said Palestinians everywhere should use the “many methods and means” that are “up their sleeves” to “powerfully explode” in Israel’s face.

Contrary to what Israel thinks, Hammad said, the Gazans are not rational, and that if they die they will do so honorably while “cutting off the heads of Jews and killing them with explosive belts,” which he said Hamas has been actively manufacturing in factories.

Calling on the seven million Palestinians abroad, whom he said have been “warming up” and “preparing,” Hammad said: “Enough warming up. … We must attack every Jew on planet Earth and slaughter and kill them.”

This is what terror group #Hamas wants to do to every Jew on the planet. This is the real face of Hamas.#StopHamas pic.twitter.com/UBKir3wstC

Hammad, according to MEMRI, also encouraged Palestinians in the West Bank to purchase knives in order to “cut the necks of Jews,” saying that knives only cost five shekels.

“We will die while exploding and cutting the necks and legs of the Jews. We will lacerate them and tear them to pieces, Allah willing!” Hammad said.

In a speech broadcast on Egyptian Al-Helma TV on 23 March 2012, Fathi Hammad, seen here more as the gangster/terrorist that he is, condemned Egypt over the fuel shortage in the Gaza Strip stating (in Arabic), “Half of the Palestinians are Egyptians and the other half are Saudis,” proving the ‘Palestinians’ are not the ethnonational group they claim they are, in English.