The Shin Bet (Israel’s Security Agency) announced Thursday that a senior Hamas operative arrested at the Allenby bridge last month revealed during interrogation that Hamas uses the Islamic Movement in Israel as a front to promote its activities within Israel, according to the Jerusalem Post. 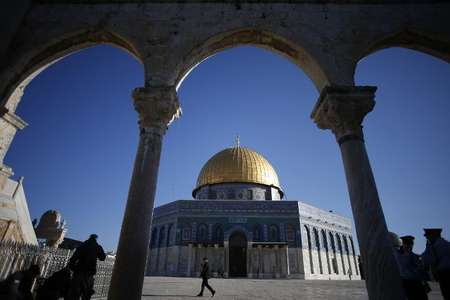 Policemen guard the Esplanade of the Mosques in jerusalem on May 26, 2014 – Photo: Thomas Coex / AFP

The operative, Mahmoud Toama, a member of the main economic council of Hamas as well as Hamas’ General Shura Council, provided the security agency with information on Hamas activities in Jerusalem as well as the organization’s funding sources and international relationships.

Toama described that Hamas uses the Islamic Movement in Israel to transfer funds to support activities in Jerusalem, including paying youths to remain constantly on the Temple Mount in order to prevent Jewish pilgrimage to the site, the third holiest site in Islam and the most holy in Judaism.

Toama revealed that the youths are paid fixed salaried of 4,000 – 5,000 NIS per month ($1,150 – $1,440) for their activities, which sometimes include harassing Jewish visitors to the site, reported the Times of Israel.

The Temple Mount remains closed to non-Muslim visitors on a daily and weekly schedule, and Jewish prayer is forbidden on the Mount. Increased restrictions on non-Muslim visitors were put into place following Jewish extremist attempts to blow up the two mosques situated on the site. The rules are enforced by Israeli police and Islamic Waqf guards.

Toama stated that a previous Hamas-backed initiative involved employing hundreds of young men to harass Jews entering the holy site. The initiative was shut down by Israeli authorities in 2013, which seems to have moved Hamas towards cooperation with the Islamic Movement.

The Shin Bet states that there has been a rise in violent clashes on the Temple Mount in recent months, according to the Jerusalem Post. 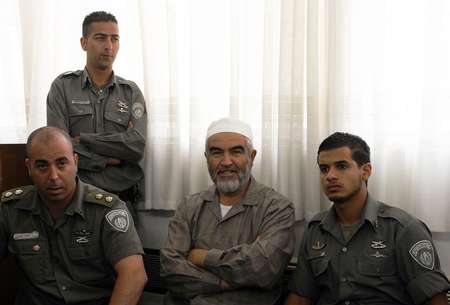 Arab-Israeli Islamist Movement leader Sheikh Raed Salah (C) waits inside the court house in the city of Ashkelon on June 3, 2010, after he was detained aboard the Marmara – Photo: AFP /DAVID BUIMOVITCH

Toama also revealed that Hamas maintains relations with cleric Raed Salah, head of the Islamic Movement’s northern branch. Salah is an Israeli citizen and has been arrested several times and jailed from 2003 to 2005 for providing funding to Hamas.

Toama told his interrogators about Hamas’ relations with the Muslim Brotherhood and that both Qatar and Turkey harbor Hamas leadership, including prisoners released as part of the Gilad Shalit deal. Eight representatives of the international Muslim Brotherhood sit on Hamas’s Shura Council.

Hamas receives funding from Qatar, Turkey, according to Toama, and also garners revenue from business ventures in Saudi Arabia, mostly in the real estate sector.

Zahi Najidat, an Islamic Movement spokesman, responded to Toama’s statements saying that “this is not the first time that our movement has been mentioned in relation to such issues…we will continue with our activities and will not respond to such concoctions and threats.”

Toama said that his party agreed to enter into a unity government with Fatah out of political necessity and that the decision did not signal a change in the Hamas world view.

Toama began as a Muslim Brotherhood operative in 1983, joining Hamas when it was formed in 1987 as the Palestinian arm of the Brotherhood.

Toama was born in 1951 in Toulkarem and lived in Saudi Arabia during the 1970s. He was indicted Thursday at the Samaria Military Court.