GAZA – The Palestinian group Hamas condemned on Tuesday Egypt’s designation of the Muslim Brotherhood as a terrorist group last week, reaffirming its solidarity with the ousted movement despite a crippling blockade imposed by Cairo. 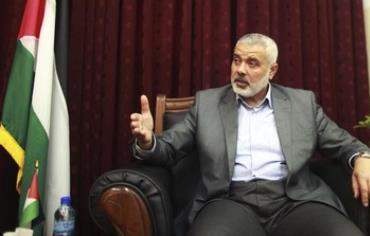 Hamas leader Ismail Haniyeh gestures during an interview with Reuters in Gaza City May 10, 2012. – Photo: REUTERS

Ismail Haniyeh, prime minister of the Hamas Gaza government, also snubbed calls by some rival Palestinian factions to sever its connections with the Brotherhood.

“We reject such a classification for the Muslim Brotherhood group. No one, regardless of its influence, can push Hamas or any of the Palestinian resistance factions to abandon their ideology, abandon their history,” Haniyeh told reporters.

Egyptian prosecutors and officials say the Muslim Brotherhood has links with domestic Islamist militants who have stepped up attacks on security forces across the country.

They also accuse the group of plotting violence along with Islamist groups from neighboring countries, Hamas and Lebanese Hezbollah.

Hamas, founded in 1987 as an offshoot of the Muslim Brotherhood, has been seen as a major loser from the July 3rd ouster and arrest of elected Egyptian President Mohamed Morsi, who belonged to the Brotherhood.

Since then, tension has grown between Hamas and the army-backed Cairo government, and curbs on trade to Gaza mounted.

“We seek to reaffirm that we do not intervene in Egyptian internal affairs. Egypt cannot do without us and we cannot do with Egypt. These historical, geographic and security links can never be severed,” Haniyeh added.

Cairo has stepped up a campaign against Hamas near its Gaza border by closing almost 1,200 smuggling tunnels that used to provide an economic life-line for the territory, home to 1.8 million people.

Neighboring Israel has also maintained a tight blockade of the enclave since Hamas took over in a brief, bloody civil war in 2007 after winning parliamentary polls the previous year.

Hamas has refused to renounce its armed struggle against Israel and is itself designated a terrorist group by Israel, the United States and the European Union.

But Haniyeh said Hamas maintained nearly daily contacts with Egyptian authorities over the movement of people through their joint border, as well as a November 2012 ceasefire with Israel.