Herzog & Livni: Israel should get US assurances to hit Iran if nuclear deal violated

Zionist Union Party calls on Netanyahu to hold in-depth talks with the US and set up contingencies should Teheran break out for nuclear weapons.

Israel should seek an understanding from the US authorizing it to take military action to protect itself should Iran violate a nuclear deal and threaten Israel’s existence, Zionist Union leaders Isaac Herzog and Tzipi Livni said on Sunday. 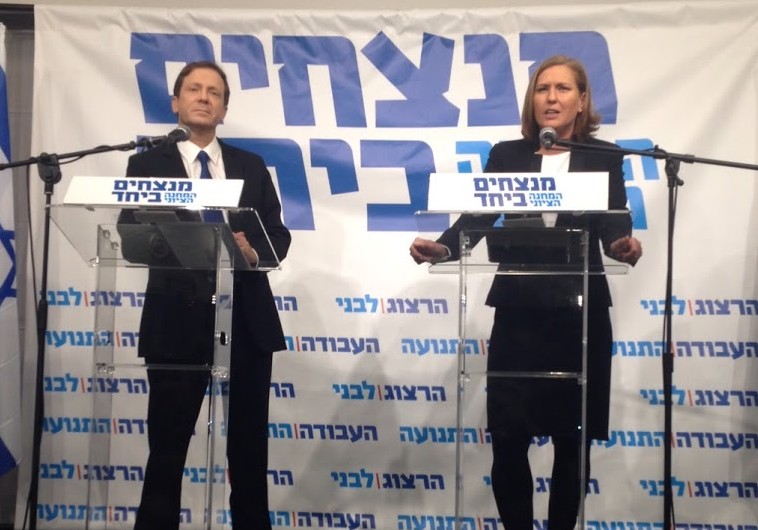 Herzog and Livni, in a statement released to the press, presented their “alternative plan of action” on how Israel should deal with the P5+1 group of world powers’ framework nuclear deal reached with Iran earlier this month.

They worked on the plan for 10 days with a team of experts and advisers, including MK Omer Bar- Lev and the head of the Institute for National Security Studies, Amos Yadlin, whom Herzog said he would have appointed defense minister had he been entrusted with forming the government.

Party officials said elements in the plan had been presented in recent days to the P5+1, in particular to senior figures in the Obama administration and to US congressmen.

The framework is intended to lay the groundwork for a comprehensive agreement that will restrict Iran’s nuclear program and allow Western inspectors better access into the country’s nuclear facilities in exchange for sanctions relief.

The party said that some of the parameters presented by the West and the Iranians in the framework are “problematic,” and hold within them “real potential dangers for the long term” that must be fixed in the comprehensive agreement to be signed by June 30.

The Zionist Union said the final agreement must hold that removal of sanctions will come only gradually and on the condition that Iran proves over time that it is rolling back its nuclear program, allowing intrusive inspection of its facilities, eliminating all of its stockpile of enriched uranium and not using its old centrifuges to enrich uranium or activating new centrifuges.

The world powers must clarify that “if Iran will break out to the bomb, all actions, including new sanctions and the military option, will continue to be on the table at all times,” the Zionist Union said.

“Israel and the US must reach a comprehensive understanding that takes into account the changing security needs of Israel as they pertain to the deal between the world powers and Iran,” the plan said.

“The understandings must include an empowering and expanding of the IDF’s defensive and offensive capabilities, a strengthening of the existing alliance and strategic cooperation that will increase Israel’s deterrence ability, in a way that will give Israel an American umbrella and the unrestricted ability to act against threats and violations both of the deal and against our regional enemies that are supported by Iran.”

Israel should be given a green light to carry out military action against Iran if its existence is endangered during the life of a final agreement, the document said. The US and Israel should reach an understanding that would “legitimize any action Israel will be forced to take in order to preserve its security in the situation that is created,” it continued.

It must be agreed with the US that the nuclear agreement will not hurt the battle against Iranian-supported terrorism and Iran’s invasive actions in the region and the world, the Zionist Union said.

Despite saying in the document that “there is no [division in Israel between] coalition or opposition” when it comes to Iran, the Zionist Union took a dig at Prime Minister Benjamin Netanyahu’s handling of the issue, saying, “Instead of a policy that leaves Israel without a meaningful influence on the world powers’ decision-making process, Israel must immediately hold a comprehensive, intimate and deep strategic discussion with the US about all of the relevant issues, and complete the discussion before the completion of the final agreement.”

Bayit Yehudi chairman Naftali Bennett posted a statement on Facebook accusing Herzog and others on the Left for undermining the government’s efforts to prevent Iran from acquiring nuclear weapons. He noted how in recent interviews to the foreign press, he had been asked about past statements by former security officials on the Left that were incorrect, including an assertion by former Mossad chief Ephraim Halevy that Netanyahu wanted to attack Iran.

“This happens all the time,” Bennett lamented. “People like Herzog say they trust the world powers to reach a good agreement. Livni and others are undermining the Netanyahu government regarding Iran, and are making our task of stopping the Iranian nuclear program more difficult. My friends on the left, the election is over. The public decided. Of course this is a democratic country and you have the right to express opposite views from the government. But, with regards to Iran, we chose a course of action that is clear, and your damage is unbearable. We are not asking for your help, but please stop getting in the way.”