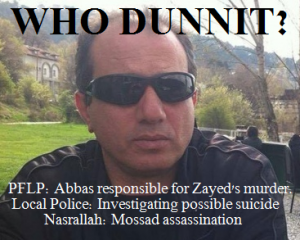 “The Mossad assassinated him and the Arab regimes don’t raise a finger,” Nasrallah said in a speech broadcast via video link by Al-Manar, the Hezbollah-affiliated satellite television station.

Zayed, from the Popular Front for the Liberation of Palestine (PFLP), was convicted of the murder of yeshiva student Eliyahu Amedi in Jerusalem in 1986 and given a life sentence. He escaped in 1990 after being admitted to hospital for medical treatment, and lived in several Arab states before eventually settling in Bulgaria.

The Hezbollah chief opened his speech by eulogizing Ali Fayed, a senior member of the terrorist organization recently killed while fighting in Syria.

“He had a central role in the organization’s military force and participated in operations against Israel, chief among them the abduction of Israeli soldiers,” Nasrallah said.

Nasrallah also claimed that Israel is refraining from attacking Lebanon because it fears Hezbollah’s response. Throughout most of his speech, Nasrallah addressed the muddied relations between his organization and Saudi Arabia, which along with other Persian Gulf States labeled Hezbollah a terrorist organization.

“Israel is the one worthy of this characterization,” he said.

Due to Hezbollah’s ever-increasing political influence in Lebanon, the Saudis severed their annual $3 billion aid package to the Lebanese government. Nasrallah accused the Saudis and other moderate Arab states of collaboration with Israel.