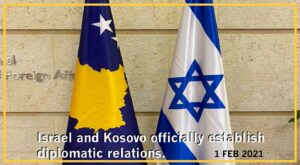 According to Ashkenazi, Meliza Haradinaj-Stublla also submitted a formal request to open an embassy in Jerusalem – which was accepted.

At the ceremony, Kosovo’s foreign minister was joined – off-screen – by representatives from the Kosovar Jewish community, and lauded this “historic achievement that brings joy to the people of Kosovo and the Jewish people.”

The agreements signed included three bilateral ones, consisting of a joint communique on the establishment of diplomatic relations and memoranda of understanding (MoU) on diplomatic consultations between the foreign ministers and on development cooperation via the Foreign Ministry’s Agency for International Development Cooperation (MASHAV).

Both ministers thanked the US for helping push these agreements forward, as these new ties were part of the Serbia and Kosovo economic agreement negotiated by former US national intelligence chief Richard Grenell. Both countries are supposed to open embassies in Jerusalem, though Serbia already has one in Tel Aviv.

“Our agreement is part of a series of agreements and understandings signed in Washington,” Asheknazi said, adding “thanks to the US for efforts to promote peace in the world and advance Israeli relationships with countries with which we have not had until recently.”

Haradinaj-Stublla also gave thanks to the US, and encouraged Israelis to invest in Kosovo.

The US State Department issued its own congratulations after the ceremony.

“Congratulations to Israel and Kosovo for formally establishing diplomatic relations – a historic day,” State Department spokesperson Ned Price tweeted. “When our partners are united, the United States is stronger. Deeper international ties help further peace and stability in the Balkans and Middle East.”

The use of Zoom to sign these agreements amid the COVID-19 pandemic is also a major step forward, according to Gil Haskel, the Foreign Ministry’s head of protocol, who dubbed it a historic moment in its own right. 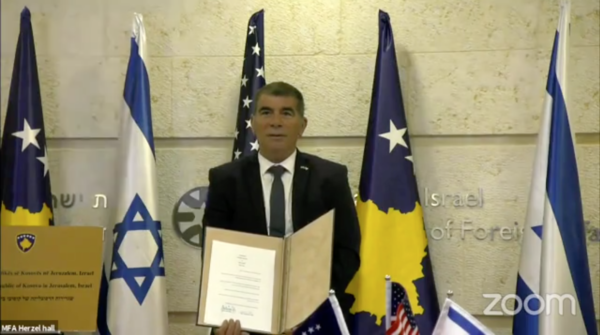 Last week, ahead of the ceremony, Haradinaj-Stublla took to social media to share a video that cited the “long friendship between our peoples,” and said that Israelis and Kosovars have a similar ethos, in that “despite the challenges we faced and that affected our existence we remained invincible as peoples and never gave up nor did we lose hope.”

She also mentioned Albanians who helped save Jews during the Holocaust, citing their custom of besa (pledge), to protect guests from harm. Greater Albania welcomed more Jews at the end of the Holocaust than at its start.

The minister said Israel has returned the goodwill by supporting Kosovo’s cause of independence and taking in Kosovar refugees.

With these new relations, Israel has become the 117th country to formally recognize the independence of Kosovo, which has long battled for recognition of its independence from Serbia.

Serbia does not recognize Kosovo’s statehood, however and an Israeli diplomatic source confirmed last week that Belgrade was disappointed with the latest developments.