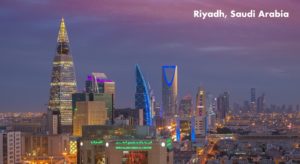 Interior Minister Arye Deri on Sunday authorized a select number of Israelis to be the first with permission to visit Saudi Arabia, under certain conditions that include Israeli entrepreneurs seeking investments, in a sign of warming ties.

After consulting the country’s security establishment, Deri issued a statement saying that Israelis would be allowed to travel to Saudi Arabia under two circumstances: for religious reasons on pilgrimage for the haj, or for up to nine days for business reasons such as investment or meetings.

Still an Apartheid kingdom, Israeli and other non-Muslim visitors are prohibited from entering the Islamic holy city of Mecca. – Photo: Wikimedia, Peter Dowley

Israel has peace treaties with two Arab countries – Egypt and Jordan – but concerns over Iran’s influence in the region have led to thawing ties with some Gulf states as well.

I commend the visit of Dr. Mohammed Al-Issa, Chairman of the Muslim World League in Saudi Arabia, to Auschwitz last Thursday. This is another sign of change in the attitude of Islamic bodies – and, of course, the Arab states – toward the Holocaust and the Jewish people.

Ties between Israel and Saudi Arabia have been warming up recently, with Prime Minister Benjamin Netanyahu thanking a Saudi political leader for visiting the Auschwitz concentration camp on the day of the World Holocaust Forum.

Netanyahu has been looking to capitalize on common interests like Iran, while also marketing Israeli technologies to try and further normalize relations.

Israelis – mostly Muslims going on pilgrimage – have been traveling to Saudi Arabia for years, but usually with special permission or using foreign passports.

Saudi authorities did not immediately respond to a request for comment.

The kingdom launched a new tourism visa last year for visitors from 49 countries, as part of its bid to diversify the economy and open up society. Israel is not among the eligible countries.

Changing the previous precedents, President Trump breaks the ice by being the very first to fly to Israel directly from Saudi Arabia. May 22, 2017 – Israel’s PMO

However, in 2018, Saudi Arabia opened its airspace for a commercial flight to Israel with the start of a new Air India route between New Delhi and Tel Aviv, even though Israel’s national carrier El Al may not use Saudi airspace for eastward flights.