Local residents in Amsterdam petition city officials to reconsider plans of €5 million monument in honor of Holocaust victims, complaining it will take up too much space in popular park. 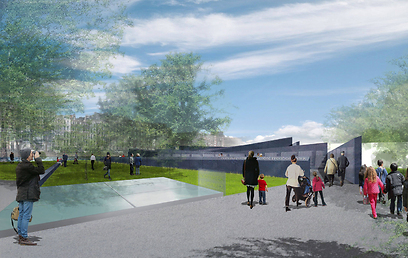 “The project currently on the table does not fit in with its envisaged surroundings,” invited resident Lina van Beest told the Amsterdam Centre council before the majority vote requesting further consultations.

The five-million-euro (6.8-million-dollar) monument is a project of the Dutch Auschwitz Committee that hopes to display the names of 102,000 Jews and 220 members of the Sinti community deported to Nazi death camps during World War II.

The “Path of Light” memorial is designed by Libeskind, master-planner of the new World Trade Centre’s reconstruction in New York’s Lower Manhattan and the Jewish Museum in Berlin.

“It’s a good idea in itself, but it makes no sense building it here. The park’s just too small,” local resident Marja Ham told AFP.

The 1,000-square-metre (11,000-square-foot) monument is planned to be built in 2015 in Amsterdam’s central 7,500-square meter Wertheim Park, in an old Jewish neighborhood, near the Jewish Museum and the Portuguese synagogue.

Residents have complained that the monument will take up too much space in the popular park, which already has a monument to the victims of the Nazi concentration camp at Auschwitz, and they are worried about the impact of the expected 200,000 annual visitors.

Residents said they were handed a done deal after the council in March signed a preliminary agreement to support the project without having properly consulted them.

The council voted that a new agreement in principle be drawn up given residents’ complaints, including looking at other possible locations for the monument.

“This is an important monument and it shouldn’t be built in hostile surroundings,” said council head Boudewijn Oranje.

The place originally envisaged is a wooded area north of Wertheim Park behind a monument commemorating the lives lost at Auschwitz.

Installed in 1993, this work by Jan Wolkers is composed of broken glass covering the ground over ten square meters, reflecting the sky, symbolizing that “the heavens has never been broken” by what happened at Auschwitz .

The Auschwitz Committee believes that the new monument “is a complement.”

“This is a silly idea that completely distorts the work of my husband,” retorts Karina Wolkers, widow of the artist: “The principle is that the trees around are reflected in broken mirrors, if we remove trees to bring a new monument, it loses all meaning.”

The committee has, however, expressed regret that the monument, whatever its final form, would not be ready in 2015, for the 70th anniversary of the end of World War II.