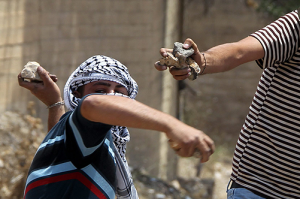 Magen David Adom (MDA) medical teams provided her treatment before evacuating her to Hadassah Ein Kerem Hospital in the capital.

“I’m visiting the country in the framework of a group of Japanese who love Israel,” said the woman. “I was very surprised to be hit by the rock, at the time I was praying and didn’t understand what hurt me.”

“Members of the group are praying for me so I wasn’t seriously wounded. I still am happy that I came to Israel and do not regret it, I will continue to travel and will soon join the group after my treatment at Hadassah,” she added.

Israel and Japan have recently become key allies, through a rapid series of mutual agreements and meetings that were set off in May 2014 when Prime Minister Binyamin Netanyahu held an official visit to Japan.

The visit was reciprocated in January 2015, when Japanese Prime Minister Shinzo Abe made an historic visit to the Jewish state.