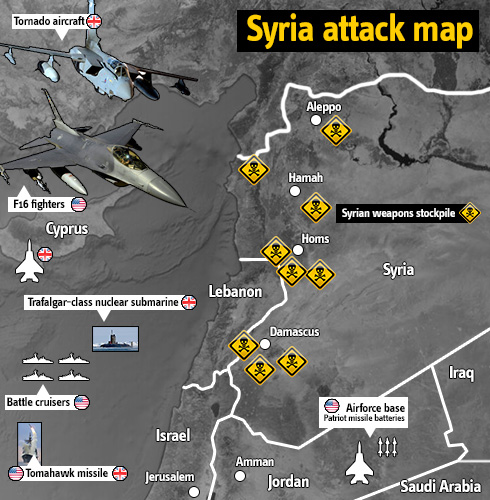 The favored option among top brass is for limited Western action using ‘stand-off’ weapons from long distance to disrupt Assad’s ability to carry out chemical attacks and damage his military machine, the Daily Mail said.

Intelligence on targets would come from drones patrolling the skies above Syria and special forces on the ground.

According to the Daily Mail, military analysts believe an attack could last between 24 and 48 hours and would target key regime installations.

The dictator’s use of air power has been a huge advantage for the regime, and eliminating or weakening it would tilt the odds toward the rebels, said the report.

Other military options are airstrikes on Syrian units believed to be responsible for chemical attacks. Reports last week claimed the chemical weapons were fired by the 155th Brigade of the 4th Armoured Division of the Syrian Army.

This division, which has a military base in a mountain range west of Damascus is under the command of the president’s brother, Maher Assad.

Forces at the ready

US-led strikes would be launched from warships or submarines patrolling in the eastern Mediterranean or Persian Gulf, or from combat aircraft that can fire missiles from hundreds of miles away.

A US Navy battle group including four destroyers is already in the eastern Mediterranean and has moved closer to Syria in preparation for action.

They are armed with Tomahawk cruise missiles capable of hitting a target from up to 1,200 miles away. Around 124 of the 18ft-long, $468,000 warheads were fired by US and British forces against Colonel Gaddafi’s forces during the Libyan war.

The US Air Force could also send B-2 stealth bombers to pound Assad’s military installations. Based in Missouri, they can cover the entire world with just one refueling.

The most expensive aircraft ever – at a cost of $935 million each – they are almost invisible to radar and can carry 40,000lb of bombs.

According to the Daily Mail, as well as having F-16 fighter jets and refueling aircraft based at airfields in the Middle East, the US also has defensive Patriot missile batteries positioned in Jordan, which neighbors Syria.

Despite multi-billion-dollar cuts to the defense budge that have seen top brass axe fast jets, warships, spy planes and 30,000 troops, the British armed forces can still contribute to an assault on Syria.

The Royal Navy could fire Tomahawk missiles from its nuclear-powered Trafalgar-class submarines – one of which is constantly on patrol in the Middle East.

The subs carry a giant payload of the super-accurate missiles.

Heavily-armed RAF Tornados could, in theory, fly from RAF Marham in the UK to attack targets in Syria – a 4,200 mile round trip – or be deployed to Cyprus to launch bombing raids from there.

The Storm Shadows have a range of more than 150 miles, allowing the aircraft to attack targets deep inside enemy territory without getting too close to anti-air defenses.

The 1,300kg missile, which technicians program with the target details before the mission, then uses high-tech GPS systems and terrain-following equipment to fly low under radar to its detonation point.

Despite being fired from 150 miles away, the Storm Shadow is accurate to up to 6ft, reducing collateral damage.

Meanwhile in Syria, snipers opened fire Monday at a UN convoy carrying a team investigating the alleged use of chemical weapons outside of Damascus, a UN spokesman said. The Syrian government accused rebel forces of firing at the team, while the opposition said a pro-government militia was behind the attack.

Activists said the inspectors eventually arrived in Moadamiyeh, a western suburb of the capital and one of the areas where last week’s attack allegedly occurred. They said the team members spent three hours at a makeshift hospital, meeting with doctors and taking samples from victims before they headed back to Damascus.