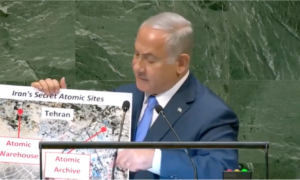 “All information obtained, including from third parties, is subject to rigorous review and assessed together with other available information to arrive at an independent assessment based on the Agency’s own expertise,” the statement said.

“It is not the practice of the Agency to publicly discuss issues related to any such information.”

The IAEA also said that the “Agency’s verification activities in Iran are being carried out based on the Comprehensive Safeguards Agreement (CSA) concluded with Iran and the Additional Protocol, that Iran is provisionally implementing. In addition, the Agency is also carrying out verification and monitoring of Iran’s nuclear-related commitments under the Joint Comprehensive Plan of Action (JCPOA).”

Netanyahu called on the IAEA to inspect Iran’s nuclear sites in his speech at the UN General Assembly on Thursday.

“The IAEA still has not taken any action. It has not posed a single question of Iran. It has not demanded to inspect a single new site discovered in that secret archive,” the prime minister said in his speech.

Netanyahu also disclosed the what he claimed to be the location of a facility in Iran’s capital that he referred to as an “atomic warehouse” full of material related to the country’s nuclear program.

The prime minister brought photos and maps of the nondescript building, which he described as adjacent to a nearby rug cleaning facility. He claimed that Iranian officials had already removed 15 kilograms of radioactive material from the clandestine structure.

Michael Wilner contributed to this report.