The IDF dismantled a Palestinian tent outpost northwest of Jerusalem on Monday, which had been erected in protest of Israeli settlement construction plans in the area. 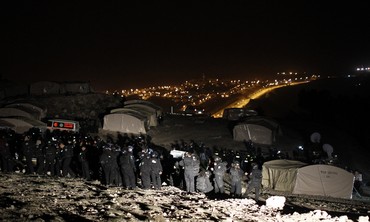 A military source said that four tents were dismantled and one building bulldozed. The source also said that the IDF removed equipment from the area. Palestinians said that a large contingent of Israeli security personnel accompanied bulldozers to the site, and activists were prevented from reaching the area, according to Palestinian news agency Ma’an.

The outpost, dubbed Al-Karamah (Dignity), was the second of its kind in as many weeks, and could mark a new form of Palestinian protest against Israeli construction in the West Bank.

“The idea of building this village extension is to protect [Palestinian] legally owned lands and [for it] to be the second such village built to protect [us] from growing efforts at transforming Arab Jerusalem,” said Kamal Hababa, who heads the Beit Iksa village council.

The dismantling of the Al-Karamah outpost came just days after Israeli security forces bulldozed the Bab al-Shams encampment, erected by Palestinians on an undeveloped area in the Ma’aleh Adumim settlement, known as E1. The activists had been targeting E1 to protest Prime Minister Binyamin Netanyahu’s November 30 decision to advance plans to build 3,500 Jewish homes on the site.

Abir Kopty, a spokeswoman for the Popular Struggle Coordination Committee, warned that the creation of Bab al-Shams would inspire Palestinians around the world.

“As soon as I was updated on the Palestinian gathering, I ordered its immediate evacuation and it was indeed carried out last night in the best possible manner,” he said of the Bab al- Shams encampment.

Tovah Lazaroff contributed to this report.